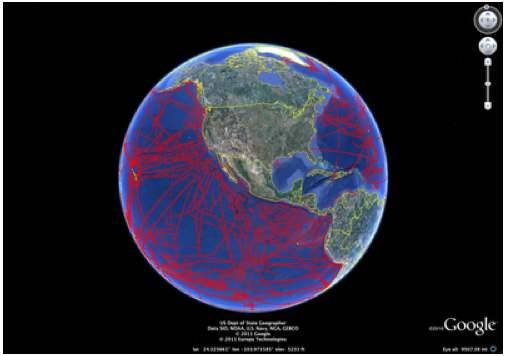 Thursday marked World Oceans Day, a United Nations effort to “raise global awareness of the challenges faced by the international community in connection with the oceans.”

Getting in the spirit, Google Earth and about a dozen research labs paired their data, talents and technology to create high res maps of seafloor terrain. Columbia University’s Lamont-Doherty Earth Observatory led the charge contributing its Global Multi-Resolution Topography (GMRT) Synthesis and some 20 years worth of data from 500 ship cruises.

The interactive topo maps they created portray an underwater area bigger than North America. Such visualizations help scientists understand natural and man-made disasters including: tsunami events and runups, earthquakes, volcanic eruptions, changes in coastal and deep-ocean sea levels, storm surges and contaminant dispersal, according to the website of the U.S. National Oceanic and Atmospheric Administration, a research participant in this project.

“…Scientists have learned much. For instance, researchers can see details of earthquake faults and underwater landslides. Shifts in the seafloor can trigger tsunamis, as shown by this year’s disaster in Japan, and the 2004 wave that swept Sumatra. The sharper imagery helps scientists assess the risk in various regions, including along the U.S.-Canada west coast. The maps also bring erupting mid-ocean ridges into sharper focus and help scientists understand volcanic eruptions on earth, the vast majority of which occur hidden far from view on the ocean floor.”

Even though this group just collectively doubled what had been mapped before, Google estimates that only 5 percent of the world’s ocean floors have been mapped to date. So. There’s far more eye candy to be had! [hat tip: Julia Whitty at Motherjones].

Check out the Google Lat Long blog explaining the project further, or take a video tour of a few of the underwater volcanoes, ridges and mountain ranges as far as 26,000 feet below the surface of the sea.