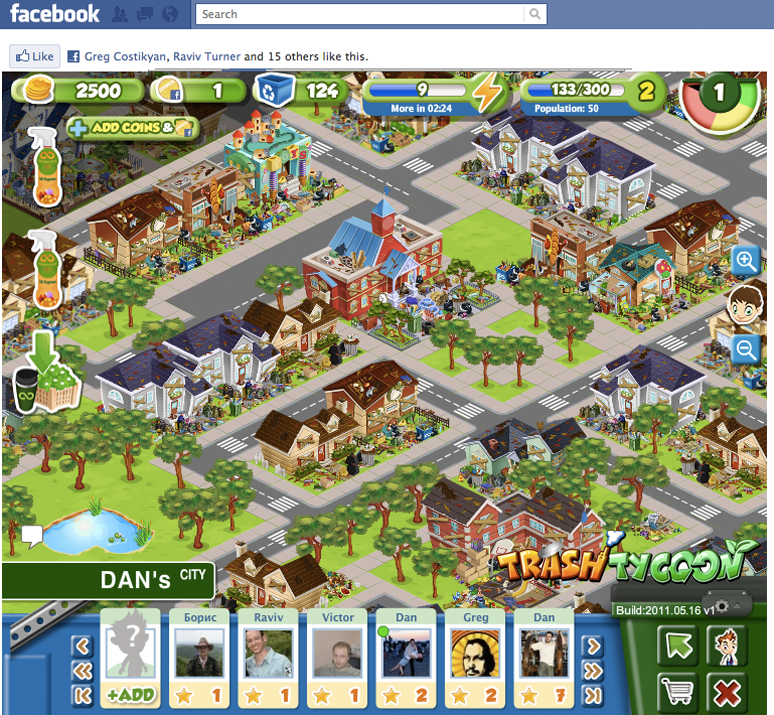 Guerillapps, a social game maker, debuted a cool new Facebook game at Disrupt NYC that is adding a new spin to green games. What’s more, from what I can tell, Trash Tycoon is the first “upcycling” game to hit the Facebook platform. But what is this “upcycling”, you ask? Upcycling is the process of converting waste materials into new products of better quality and higher environmental value, so when gamers play Trash Tycoon, they take on the role of recycling entrepreneurs responsible for doing just that.

Gamers become the stewards of their city, a la Sim City, fighting litter and trash wherever it rears its ugly head. Players earn game money and points by collecting trash and upcycling it to create new products out of trash, just like its sponsor TerraCycle does in the real, green world.

Guerillapps, which recently received a $500K in seed funding from Rhodium, will be keeping Trash Tycoon in private beta until later this month, but TechCrunch readers can get an early taste of the game here.

One of the many cool parts about Trash Tycoon is that it’s trying to separate its game from the traditional Facebook social game model by adding synchronous play, offering realtime multiplayer, so that users can communicate and collaborate in realtime during play, banding together with friends to attack their city’s trash heaps.

Trash Tycoon is also putting an interesting spin on its revenue model, offering seamless inclusion for green brands right in the gameplay. This may sound slightly off-putting, after all, who wants to play a game with brand logos stamped on every object? But Trash Tycoon’s brand integration isn’t offensive: The energy items players need to collect may be branded products, as will the factories players build to recycle waste. But these brand tie-ins have real world justification. The piece of gum you collect might be Wrigley’s, and so on.

“We integrate the same real world dynamics of TerraCycle brands in the game in attempt to avoid things like banners, or in-your-face branded items, for example”, said Guerillapps Co-founder and CEO Raviv Turner.

And the great thing about Trash Tycoon’s brand integration is that it’s enabled by TerraCycle’s business model. Just as TerraCycle works with major partners to run packaging reclamation programs, which pay schools and other community groups to collect the sponsors’ packaging to later be upcycled into items that bear the sponsor’s brand, this process is mirrored in Trash Tycoon. The company is also able to leverage the existing user bases of its partners, like the 24 million at TerraCycle, which significantly helps write off user acquisition cost. It’s a ready-made user base.

For Guerillapps, it’s not just about offering a game-ified product or game-ified approach to green behavior and upcycling, it’s about creating a playable social game that incorporates reality into the virtual world. Waste Management built a Facebook game to teach users how to use its interactive recycling kiosks last year, but the game still hasn’t taken off (only 6,400 montly active users), and Guerillapps hopes that by incorporating brands and real world concepts like recycling and upcycling organically into the game, as opposed to a game-ified, education-entertainment gameplay experience, the player will learn but do so with greater enjoyment.

To build a more playable game, Guerillapps brought on two veteran game designers Greg Costikyan and Naomi Clark (who has consulted and developed concepts for clients and publishers including PBS, Disney, Fisher Price, Wizards of the Coast, Electronic Arts, Nintendo, Major League Baseball), who are both responsible for Trash Tycoon’s addictive design and gameplay. The veteran designers goes towards alleviating any concern that this is just another Facebook game ported from another medium or whipped off in 24 hours.

Trash Tycoon has partnered with Treehugger.com and also donates 10 percent of revenues from its virtual currency to CarbonFund.org and plans to later introduce a “Play to Offset” icon, so that if you, say, order an Amtrak train ticket, or buy a flight ticket online, CarbonFund partners will present the “Play to Offset” icon so users can go play Trash Tycoon and offset their carbon footprint, instead of just paying with a credit card.

Turner says that that Guerillapps next steps involve taking the Trash Tycoon model to other verticals, like energy, health care, parenting, and more. The company isn’t looking to be the next CityVille, he says, the team wants to design games around affinity groups, which offer a more active and social (and socially active) community of users looking to learn and have fun while doing it. The startup is also currently in the process of raising its second round.