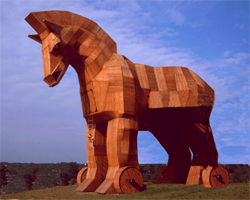 As I aimed to convey in my “Day In The Life Of A Liveblogger” post back in March, liveblogging a big ol’ event can be… interesting. When you’ve got tens of thousands of people tuned in and waiting for news the very instant it breaks, issues that might otherwise seem trivial can bring your entire operation to a grinding halt.

Such was the case on Monday, while MG and I liveblogged Apple’s WWDC 2011 Keynote. One little thing — or, more accurately, lots of one-little-things that came together into one big bastard of a little thing — nearly wrecked it. And it’s sort of Google’s fault.

First, a bit of background: back in May, Google held their annual I/O conference at the Moscone center in San Francisco. Every year, Google gives attendees a gift or two for coming out — and this year, they went all out. They started by giving everyone 10.1″ Galaxy Tablets — then they announced that everyone who showed up would be getting one of Google’s fancy new Chromebook laptops in the mail. When folks went to go pick up up their Galaxy Tabs, however, there was one more surprise: a Verizon 4G Hotspot, complete with an LTE SIM good for 3 months of service. Hurray!

So, what the hell does this have to do with WWDC?

Jump forward a month to the WWDC keynote. We’re about 1/3 of the way through — so far, so good. Last year’s Keynote was plagued with WiFi issues so bad that they resulted in cataclysmic on-stage demo failures. The issues, it’s thought (or at least, so said Steve on stage), were caused by the number of MiFis and other portable WiFi hotspots being used in the room — a circumstance which Penny Arcade summed up rather aptly. Fortunately, Apple put a ridiculous amount of effort into their network this year, so the WiFi was pleasantly speedy and seemingly rock solid.

Somewhere around the 40% mark, the conference center’s WiFi suddenly started crawling. It still worked… just at sub-56k speeds. Wuh-oh. When you’re trying to upload high res images and blast out quotes as they leave the speaker’s lips, thats not okay. At that second, it seemed like every reporter in the room had the same idea: Hotspot time! People reached into their coat pockets and laptop bags, and the little Hotspot status lights flickered into view all around me.

Those 56k speeds we had before? Obliterated, with each page request now resulting in an immediate browser error. The WiFi status indicator in my taskbar starts shuffling around as it searches for signal amongst the noise, and the guy next to me turns to check if he’s alone on this island of disconnection.

We’re somewhere around the 2-minutes-without-connectivity mark at this point. While I let my laptop try to work its issues out for itself, I pop onto my iPhone — in worst case scenarios, I can usually still liveblog, one tiny keystroke at a time, from that. I jump into the WiFi screen just for kicks, and this is what I see: 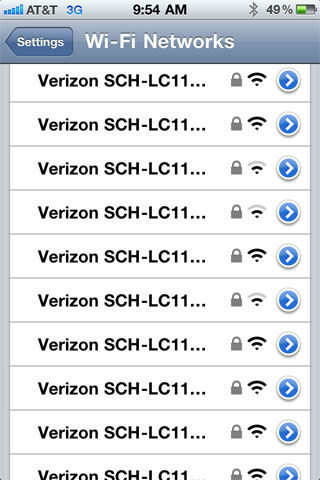 Each of those “Verizon SCH-LC11” WiFi access points? Those are Verizon 4G Hotspots.

The very same Verizon 4G hotspots that Google gave out at I/O.

At the very same convention center. To many of the same people who were sitting in this audience.

There were dozens of them. That screenshot only shows a few, but there must have been at least 30 — and that’s just what was within signal reach of my chair in the auditorium. And, based on the grumbling and cursing going on all around us, no one could connect to any of them. A billion little boxes, collectively canceling out everyone else’s ability to connect to their own little boxes — and, in turn, canceling out everyone else’s ability to connect to the conference center’s primary WiFi network. I’ve spoken to others who were seated elsewhere in the auditorium — outside of the corner of the theater where Apple ushered the media — and all of them said their WiFi held strong and hasty throughout. Only in this little corner, crammed with a mountain of crazy-shouting-people boxes, did things go dark.

Fortunately, MG’s stars aligned in such a way (or his chair was just in that perfect spot) that he’s able to pull down juuuuuust enough bandwidth to fire off an update or two, mostly masking the fact that we’re having any technical difficulties. Then magic happened.

I don’t know if Apple summoned some sort of WiFi God to come down and smite away the hotspots one by one, or if people collectively realized they were just making their own problems worse — but over the course of about 2 minutes, the number of “Verizon SCH-LC11” clones dwindled. As it hit single digits, the primary WiFi network found its way through the noise. After nearly 8 minutes of scrambling for every bit of bandwidth we could scrounge (and playing off the whole thing quite undetectably, I must say), things were back up and running.

Whether Google knew it or not (and I’m highly doubtful that they did… though they did make sure to give out the hotspots on the last day of their own conference, after all of their big announcements were well over), their nice little parting gifts would act as itty-bitty Trojan Horses at WWDC, bombarding the airwaves and knocking much of the reporting crowd offline for a time.

If someone at Google actually did plan this: Good job, you friggin’ evil genius. 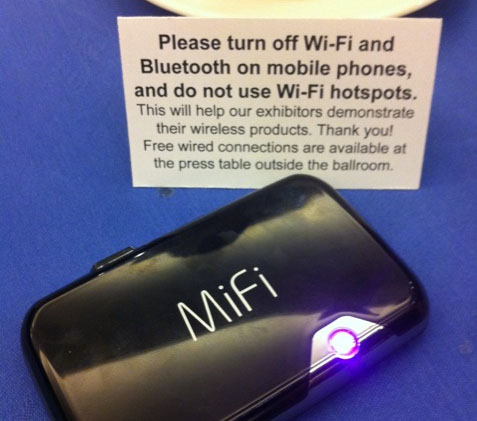