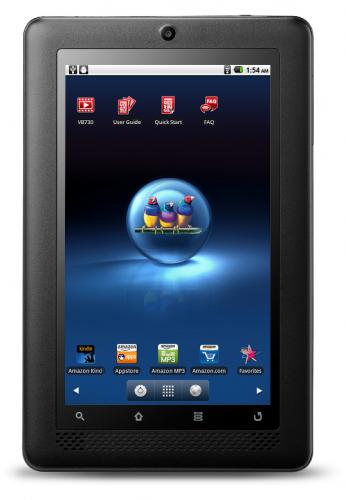 The Nook Color may have met its match, or at least been introduced to its newest competitor, as Viewsonic today introduced the ViewBook 730 Android tablet. Viewsonic has branded this device as a tablet, with a tagline reading “changing the face of tablets.” No telling yet whether that bold promise is one to trust, but it does seem like the ViewBook 730 is better suited for a strong run in the multi-purpose ereader category. Watch out, Nook Color!

From what we can gather, the ViewBook 730 runs Android 2.2 Froyo on top of a 1GHz processor, and touts 8GB of internal memory with support for a microSD card. The tablet/ereader’s HDMI out port supports 1080p video playback, and a VGA camera is located on the front of the device for video chat. Not unlike the HTC Flyer, the ViewBook 730 comes with a stylus. As far as software is concerned, Amazon Appstore for Android and Adobe Flash 10 come pre-loaded on the device.

According to Viewsonic, the ViewBook will become available at the end of June for the budget-friendly price of just $249.99.