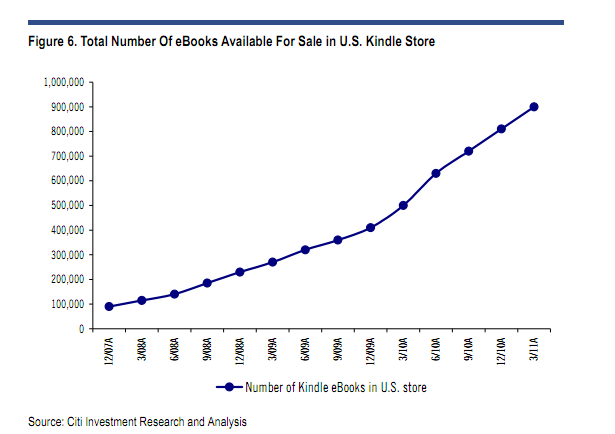 As books goes digital, Amazon is managing the transition nicely with the Kindle. Amazon now sells more Kindle books than print books, and offers nearly a million ebook titles. In a research note that just went out this morning, citi analyst Mark Mahaney estimates that sales of Kindle devices and digital books will account for 10 percent of Amazon’s revenues in 2012.

Thanks to the Kindle, Amazon’s U.S. book business is growing faster than at any point in the last ten years. So far in 2011, Amazon has sold three times as many Kindle books as during the same period last year.

Mahaney estimates that total Kindle revenues last year were $2.5 billion, or 7.2 percent of Amazon’s total. He thinks that total Kindle revenues will hit $3.8 billion this year (8.0 percent of revenues), and $6.1 billion in 2012 (9.9 percent). He breaks that down between device sales and ebook sales (see his model below). For instance, he just increased his estimate of how many Kindle devices Amazon will sell this year from 16.5 million to 17.5 million units, and he expects another 26 million Kindles to be sold in 2012.

The number of Kindle books sold this year will increase to an estimated 314 million, from 124 million in 2010. And Mahaney expects that number to grow another 140 percent in 2012 to 752 million.

Digital book revenues should surpass device revenues in 2012, when Mahaney estimates that Amazon will make $2.4 billion from device sales and another $3.7 billion from Kindle book sales.

Now Amazon just has to figure out how to transition its sales of physical CDs and DVDs in music and movies as effectively as it is doing for books. HD Kindle Movie Player anyone? 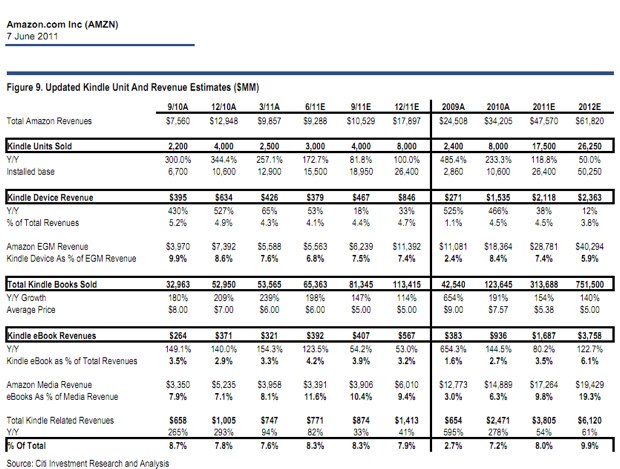