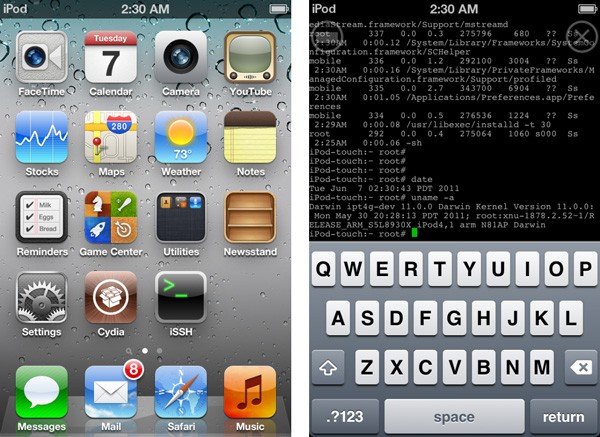 Turns out the folks over at the iPhone Dev Team didn’t waste any time after Apple released the developer version of iOS 5 yesterday – as you can see, iOS 5 has been jailbroken. Apparently, Apple hasn’t done much by way of patching up those holes that were used to jailbreak iOS devices. Musclenerd tweeted yesterday, “iOS 5 jailbroken: via limera1n + tethered boot..not too many surprises :),” and threw in some pics (shown above) of Cydia and iSSH displayed on the home screen of a 4th-generation iPod touch.

Cydia and iSSH are both apps that only run on jailbroken iOS devices. So far, we’re hearing that the only way to fix the current iOS exploit is a hardware update, which means you’ll get to enjoy all the freedom of a jailbroken iDevice until the next-gen iPhone and iPod touch see the light of day.