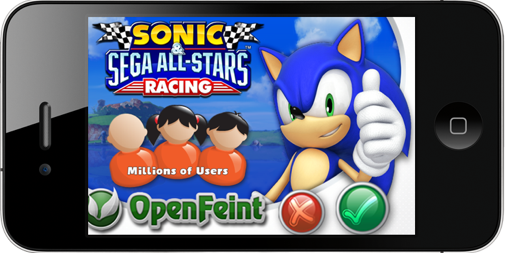 OpenFeint’s plug and play mobile social platform and application for smartphones includes a set of online game services such as leaderboards, virtual currencies and achievements running in a cloud-based Web environment.

With OpenFeint, Sonic and Sega All-Stars Racing players can add friends on OpenFeint’s gaming network, access leaderboards and achievements, and post updates to Facebook and Twitter. SEGA can also send players direct, actionable messages. The app will be available on iOS later this summer.

Previously, OpenFeint has helped other gaming giants like Taitu and Capcom go mobile. For OpenFeint, a deal with Sega is another well-known partner to add to the list of its rapidly growing community of developers.

And the company just got bought by Japanese gaming giant GREE for $108 million. With GREE’s resources, OpenFeint could be cooking similar