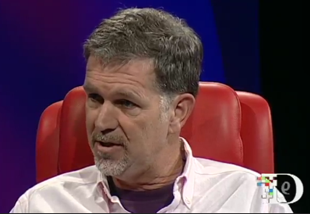 Netflix CEO and founder Reed Hastings took the stage at All Things Digital’s ninth conference, speaking with Kara Swisher about the company’s future strategy, competition, content deals and more. When asked about whether the company is looking to add more new released, Hastings said that Netflix is actually a complement to platforms that offer new releases.

One of the pain points of using Netflix is that the TV and movie platform doesn’t offer a lot of new releases, the way that iTunes or Hulu does. But Hastings doesn’t seem to be too concerned about this, openly stating that he feels that Netflix can be paired with sites and platforms that offer newer content. He added that he’d like to include prior-season shows from channels like HBO and Showtime. He says his ‘check isn’t big enough for now’ but there are ongoing talks about buying this type of content. Specifically, he says he’d love to add HBO’s ‘The Wire.’

In terms of licensing content from studios and content owners, Hastings said that the “relationship thing is over stated,” and if you have a big checkbook you can make the deals.

With regard to the competition, Hastings believes that Comcast’s on-demand platforms like TV Everywhere will become a major competitor as cable and telecommunications companies improve their on subscription and content offerings. In order to compete with both these companies and platforms like iTunes, Amazon and Hulu; Hastings says Netflix will have to improve personalization, the user interface, and work on how to integrate social features.

Social is a ‘five year investment path’ says Hastings in terms of product development. He says Netflix will have a deep integration with Facebook, but the company has to figure out what makes sense in terms of privacy.

International expansion is also a significant focus for the company in the coming year. Netflix launched in Canada and will expand to a second, unnamed country later this year. Hastings says Asia is a particularly important region for Netlfix’s expansion, with potential markets in Korea, Indonesia, Japan, and India.

What’s keeps him up at night? Hastings says that he worries about continuing to innovate, as a large company. One of the keys to this is building up quality talent.

Additionally, he says that Netflix has no plans to include ads in its free version.