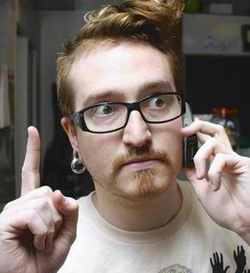 The Obama 2012 campaign is about to get a lot hipper. Former CEO and apparent unabashed wacky person Harper Reed has just been named as its CTO. Reed was at Threadless until 2009, then moved to Rackspace for a couple of months, after which he worked on personal projects and advised startups like SugarSnap and Tap Me, while working on personal projects like CTAAlerts.com and Supertrackr.com.

If you’ve got any doubts about my hipness claims above, read Reed’s description in the Chicago Tribune.

“Reed is hard to miss in a room. His hipster look includes an often-changing and often-wild hair style — from a mohawk to a flipped-up front like Jim Carrey’s in “Ace Ventura: Pet Detective.” He wears thick, rectangular glasses and gauge earrings, which make the wearer’s lobes expand. On his blog, he declares himself “probably the coolest guy ever.”

This hire makes complete sense. The ethos of the user designed, user submitted Threadless is sympatico to Obama’s super social media savvy style. Obama’s 2008 election was partly won by the online efforts of Blue State Digital and up until now the re-election campaign has been heavily Facebook focused. the President recently made history by giving a townhall at the social network’s headquarters in Palo Alto.

Looks like Obama’s experience as a community organizer is coming in handy during a time where communities are increasingly organized online. Also: I can’t help but think about a Threadless-integration for. 2012 campaign T-Shirt.