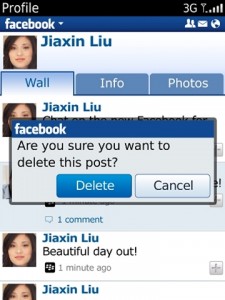 Remember that one time when there was no Facebook app for the iPad? And everyone was really upset about it? And we all just wished that Zuckerberg and Jobs could find some common ground, whether it be in Flash or not? Yeah, we haven’t quite woken up from that nightmare yet, but BlackBerry users certainly have something to celebrate: Facebook for Blackberry Beta v2 (Beta 3!) just went live in the BlackBerry Beta Zone.

While Facebook for Blackberry is nothing new, Facebook has been crackin’ away at a pretty massive overhaul for their Blackberry app since around the middle of March.

With the update to v2 (Beta 3), Facebook for BlackBerry gains much needed Wi-Fi support, which includes the ability for users with a BlackBerry data plan to receive push notifications while connected to a Wi-Fi network. The updated version of the app also gives users the ability to delete unwanted comments and posts from their wall, and even sends a prompt asking whether the user would simply like to delete this comment from Facebook for BlackBerry, or from their entire account. You must register to be a BlackBerry Beta Zone member and receive a keycode to download the latest version of the app.