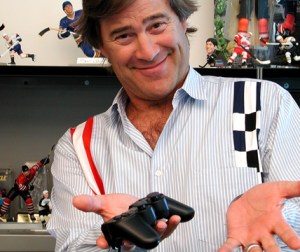 We’re continuing to highlight some of our favorite moments from the many hours of backstage content live-streamed during Disrupt last week. One of my favorite sit-downs was with Bing Gordon, general partner of Kleiner Perkins.

A fireside chat with Gordon is always…unique. We didn’t get poetry this time, but we had a fascinating talk about how the cost of entertainment has collapsed from $1 an hour to as little as $.05 per hour. In terms of gaming, Gordon was one of the people who set the $1-per-hour price back in the 1980s while at Electronic Arts. (When the Bill Cosby-esque shirt to your left was also in fashion.) Now, he’s helping erode it as a board member and investor in Zynga. That’s the Silicon Valley ecosystem in a nutshell.

He expects the cost of media– whether news, movies, or games– will settle out at $.15 to $.20 per hour. That doesn’t mean EA is necessarily toast, but it does mean the company needs to radically rethink its business model. Game quality and playtime aren’t the issues, he argues. All of that is increasing. It’s missing this fundamental shift in what people pay for an hour of entertainment that is slowing strangling the gaming giants of yore.

Gordon and I also chat about the similarities between hockey and venture capital, and a he gives a warning for entrepreneurs. Playing hard to get doesn’t work with him.