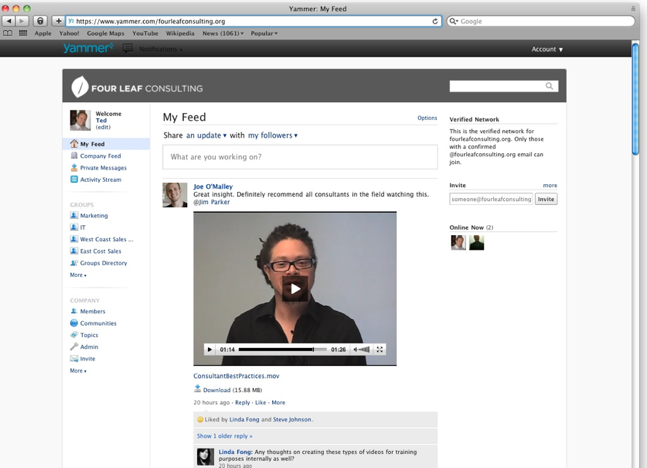 Enterprise social networking platform Yammer is adding two new features to its platform today that are worth noting. The company is supporting in-line videos within news feeds, and is also allowing users to recognize colleagues with badges.

Now you can attach videos to Yammer messages (just as you would with a Word document or PowerPoint presentation), and then users can play the videos directly in the feed, comment, and like videos. Users can also browse all uploaded videos that have been added to a company’s stream and search for videos by keyword. Yammer says that the video player is HTML5 compatible and works in the web browser on the iPhone and iPad.

Yammer is also releasing Praise, a new application that allows users to reward colleagues with badges. Users will be able to see all the badges they and other co-workers have earned over time via a recognition tab on their profile pages.

While badges and in-line videos are relatively small additions to the collaboration app, the addition of both features show that Yammer is steadily becoming a full-fledged social network for the enterprise. And we know that the company has ambitions of being the Facebook for the Enterprise. Now if only Yammer could make its AIR and mobile apps less buggy…