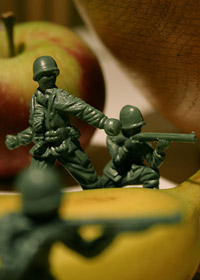 As sad as it is to think about, cyberland gets more and more dangerous each year. Identity theft and random acts of hackery are now everyday concerns to most people, or at least a tiny fear that looms in the back of every head staring at a web page. Both the United States and United Kingdom armed forces are realizing the vulnerability within this particular patch of battlefield, and have finally declared that cyberwar is, in fact, an act of war.

Over the Memorial Day weekend, the Guardian reported that the U.K. has been developing weapons specifically designed for offensive attacks on computing systems, classifying the weapon as “an integral part of the country’s armory.” Today, the U.S. military followed suit, according to the Wall Street Journal, which reported that the U.S. will respond with brute force to any form of a cyber attack. “If you shut down our power grid, maybe we will put a missile down one of your smokestacks,” claimed an unnamed military official in the WSJ’s report.

This really comes as no surprise after the stir caused by the Stuxnet virus. Defense contractor Lockheed Martin confirmed that the virus was a cyberattack directed at Iranian nuclear operations, and with governments reigning in military spending, the armed forces stand to benefit directly from any potential new threats, just like this one.

But there will be a bit of a learning curve for both the attackers and governments alike, as cyberwar isn’t the same bomb-launching, tank-rolling, Osama-raiding experience we’ve all been exposed to. For one, the origins of a cyber attack aren’t always apparent. Plus, the nature of the world wide web means that any viral attack on a specific target will most likely injure the attacker and its allies, as well.