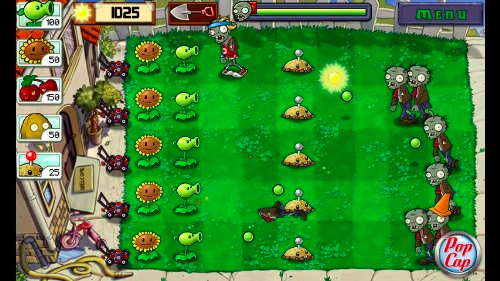 If you were among the first wave of people to buy an iPad last spring, there’s a good chance you spent a lot of time playing one game in particular: Plants vs Zombies. PopCap’s smash hit was one of the first games on the iPad and it did extremely well, and it’s also seen a lot of success on the smaller iPhone/iPod Touch form factor. Now, some 16 months after its release, the game still ranks #27 on the App Store’s list of top paid apps. It’s not Angry Birds, but it’s easily one of iOS’s most popular games ever.

And today, finally, Android fans are getting a chance to smack down some cartoonish undead. The application just launched on Amazon’s Android Appstore, and you can download it right here (it’s free today, and will be $2.99 starting tomorrow). Oh, and you won’t find it on the official Android Market for another two weeks. Unfortunately it isn’t currently optimized for tablets, but it should still work fine.

The launch is a big deal for two reasons. First, Android gets another AAA game title, giving users one less reason to look longingly at their iOS counterparts. And it’s also another big marketing push for Amazon’s Appstore, which is a direct rival of Google’s official Android Market.

Amazon’s Appstore launched in March, offering users a slightly different experience from Google’s official Market. Apps on Amazon’s store are all tested to ensure a baseline level of quality, and Amazon also provides recommendations and steep discounts on some apps. These are great features and it’s nice that Google has some competition when it comes to app distribution, but Amazon has its work cut out for it.

The Amazon store takes advantage of the fact that Android is an open OS — through a process called sideloading, you can install any application you want without requiring Google’s approval. To access the Amazon store, users visit amazon.com/appstore from their phones, then download and install the store client from there. Unfortunately the process is a bit cumbersome — you have to dig through your Android settings and tap a checkbox that allows for installation from “Unknown sources”, complete with a warning that you are potentially exposing your phone to more malicious applications. Most users aren’t going to bother with this unless they have an incentive to.

Which is why Amazon is working with developers to offer exclusives like Plants vs Zombies and Angry Birds Rio — and they’re also giving away one application free every day. This is a good tactic for building early traction, though in the longer term Amazon will need to work out partnerships so that its Appstore comes pre-installed on devices (it will obviously come pre-installed on whatever Android devices Amazon builds itself). Because no matter how many neat games Amazon offers exclusively, that “Unknown sources” check box is a big hurdle.

This isn’t the first grade-A title that made waves on the iPhone and was later ported to Android: Doodle Jump has been available since March 2010, Angry Birds arrived last fall, and Flight Control came out in April of this year.