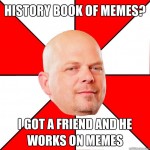 Sigh. Today is Memorial Day in the US and along with marking the start of summer here, it’s a national holiday in which citizens are supposed to remember U.S. Serviceman who died while serving our country. Often those celebrations involve picnics, family time, and, here in the great state of Michigan, “going up north.” While I’ll argue all day that those events are the proper way to remember fallen soldiers, it bugs me to no end that it’s the History Channel’s seemingly new tradition to run back-to-back reality shows today rather something a bit more on topic. They have the available library. The station was, after all, primarily dedicated to all things war and US history up until a couple years ago when the reality shows invaded.

I pointed this out last year with a good amount of rage. But here I am one year later writing on the same topic, and I still don’t think it’s too much to ask for Band of Brothers instead of Pawn Stars.