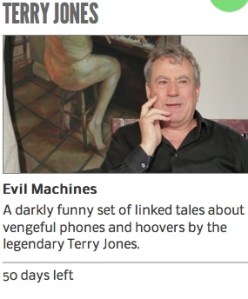 Thanks to Kickstarter, the idea of crowd-funding a creative project is nothing new. Post- Cory Doctorow, the notion that an established author might convince his fans to pay upfront for a special edition of an as-yet unpublished book is hardly earth-shattering. And, following the launch of Byliner, even the launch of a digital-only publishing house isn’t really news.

And yet, by combining all of the best elements of those three examples, UK-based Unbound hopes to create something very remarkable indeed.

The premise behind Unbound is this: even established authors sometimes feel under-served by their usual publisher. Perhaps a member of Monty Python suddenly has an idea for a children’s book, or the creator of a cult TV show decides she wants to write her first novel for a decade. The publishing industry being what it is today, such not-quite-no-brainer projects might never make it further than the proposal stage. And yet, as Cory Doctorow admits, self-publishing a physical book can be a painful experience, both mentally and physically.

That’s where Unbound comes in. As with Kickstarter, specially selected authors can pitch their book to fans (and potential fans) in the hope of attracting sufficient pledges to continue. Different pledge levels mean different things: from ebook editions, à la Byliner, to beautiful personalised hardbacks, signed and numbered by the author, as pioneered by Cory Doctorow. Importantly, when it comes to the print editions, all of the production and distribution is handled by Unbound, saving authors from the back-breaking, soul-destroying, wheel-reinventing effort of self-publishing.

If the funding threshold is met, then the writing and publishing process begins. If not, subscribers can either have their money refunded, or apply it to a different project (this is notably different from Kickstarter, where nothing is charged until a project goes ahead). During the writing period, donors are given access to the author’s “writing shed”, where they’ll receive updates on progress, exclusive videos, diary entries and more. For fans of authors like Terry Jones, this element alone is worth the price of admission. High end pledges also bring invitations to launch parties and even lunches with the author.

I caught up with Unbound’s co-founders – Justin Pollard, John Mitchinson and Dan Kieran – while I was back in London. All three are successful authors, and Mitchinson’s career also includes stints as Marketing Director of Waterstone’s (the UK’s largest book chain) and as MD of Harvill Press. He is also vice-President of the Hay literary festival and Director of Research for Stephen Fry’s QI TV show.

The team’s pedigree is reflected in Unbound’s ability to attract big name authors from the start, and in its innate understanding of what both authors and readers demand from the publishing process. I’ve never been more than slightly tempted by the hipster-centric nonsense offered on Kickstarter, and I’ve only dipped my toes into Pledgemusic once, but of the five launch projects offered on Unbound.co.uk, there are three – Terry Jones’ Evil Machines, Amy Jenkins’ The Art of Losing and Jonathan Meades’ by Museum Without Walls – that I plan to subscribe to as soon as I’ve finished writing this.

The founders also understand the importance of allowing authors to retain as many rights in their work as possible. Unbound retains the publication rights in books it signs for the first year (“longer copyright terms are increasingly becoming meaningless,” says Mitchinson) but after that authors can sell paperback rights – and the rest – to traditional publishers if they wish. This leaves open the possibility of books proving their worth on Unbound before being picked up by the traditional publishing industry.