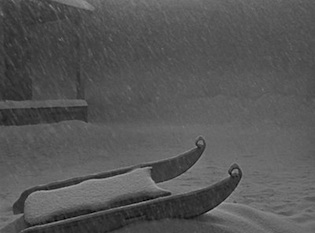 I’m a creature of habit, of habits I create to push myself forward. When Twitter appeared, I knew it was a habit that would grab a hold of not just my generation but many others. In fact, it grabbed a hold of the notion of generations and twisted it into something special: a generation of the now.

The other day we were in Las Vegas, in a hotel that like all of Vegas stank of cigarettes and losers, which by definition included us for being there. We sat at a sushi restaurant, or what started with sushi and ended with samba — three kitchens with little crossover from latin to salmon. And so we sailed across the generations, talking music and the history of salesforce, and arriving at the movies. And in particular Citizen Kane.

Orson Welles’ defining moment, the intersection of melodrama and politics, of the end of the age of controlled media and the dawn of what we now call social media. The story of Charles Foster Kane, a stand-in for Hearst who started wars when there was a dearth of headlines. We saw him in a fake newsreel standing on a balcony with Hitler, saw the arc of his life at the center of the Golden Age where Washington and Hollywood were two sides of the same coin. And as we were swept along in the daring pop media that the film invented, we became a generation of one.

Go look for Kane on Netflix and it’s not available, at least not for streaming. That’s because the owners of the film can still wring a handsome sum out of the 1941 release. Black and white, but stunning in its visual quality, the experiments of cinematographer Gregg Toland who flooded the sets with enough light to allow perfect focus with infinite depth of field. In enabling the dramatic perspective shots, Toland had ceilings constructed, anticipating the move to location filming when faster lightweight cameras were developed.

The story-telling was equally elliptical, with flashbacks tracing various stages of the great life, and in the process opening the picture up with the passage of time and intersecting impressions from a wide range of family, friend, and foe. Like the Godfather films a generation later, history and personal drive stood side by side, informing each other. Like the Kennedy assassination and the ascent of the Beatles, two polar opposites that defined the culture in ways that still are being played out.

And then there was the conceit of the enterprise: the idea Welles had that he could create a self-contained world, or universe even, where the natural laws of ambition and power met forces even greater. Kane was a hurricane without peer, a modern king who took his birthright and assembled a Xanadu to house the treasures of emperors and dynasties alongside the stars and leaders of the day. And Welles drove the picture through the force of his will, co-writing, starring, producing, and directing a film that would easily have won the Academy Award it was nominated for if not for the vendetta Hearst held against Welles and his team for the rest of his and their lives.

In the early Eighties, the computer revolution began to take shape, fostered by the space program and the spirit of the Kennedys and the Beatles. Apple synthesized the two threads with its choice of a name, and the Web birthed a generation of Kanes that has yet to subside. Viral wealth creation and the culture of the virtual king-making machine may still be playing out, but as the old saying goes in Hollywood, they don’t make stars like they used to. As Zuck and Ev and even Larry and Curly attest, the era of the studio system has come to an end.

But the spirit of Kane is alive and well, and the proof is in the social wave. Just look at the entropy of Windows, the power of realtime building a head of steam as it reworks our language like the Front Page remade our dialogue, like the West Wing suggested we could carry on big decisions while getting plenty of exercise, like Twitter begat Foursquare begat Groupon begat the App Internet. We’ll argue about all this across the realtime stream, claiming winners and losers and revenue in between. But we’ll do this as one generation, united by the breathless mothers of invention, those who like Welles dared to produce a wave of innovation that will shape our lives far into the future.