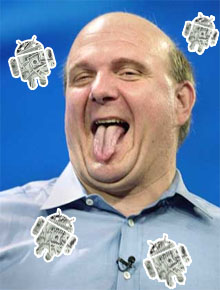 Depending on how you’re counting (whether or not you’re including slightly varied models or not, for example), Microsoft’s Windows Phone 7 partners have released either slightly over or slightly under 10 different handsets since the platform’s debut.

In that same time, how many Android phones has Microsoft released? Zero. Of course, no one would really expect Microsoft to release an Android phone, of course — but get this: Microsoft has likely made around 5x more money from Android than they have from Windows Phone 7.

You see, back in April 2010 Microsoft and HTC got into a little legal battle over a few patents which Microsoft claimed HTC was infringing with their Android phones. It never evolved into a formal lawsuit, because HTC turned around and offered to pay a licensing fee. That fee, according to a report from Citi analyst Walter Pritchard, is $5 per device.

At the same time, Microsoft has been licensing out Windows Phone 7 to handset manufacturers at a cost generally believed to be around $15 per device.

Yep. Without building a single Android phone, Microsoft has very likely racked in $150 million from Android. And that’s just from their deal with HTC, mind you — it’s entirely feasible that they’ve got similar deals with the other Android-building big-guns (like Samsung, or LG), and that such details just haven’t trickled out yet.

[via the incredible asymco]