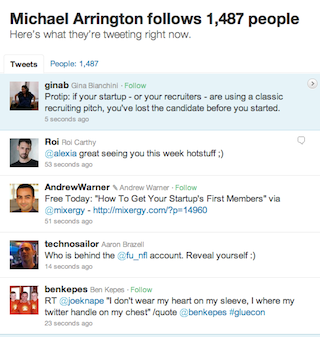 Twitter has just rolled out a nifty little feature. Now on anyone’s profile, when click on the “Following” link, you’ll be able to see exactly how they see Twitter. In other words, you can see the same timeline of tweets that they see when they’re looking at their main feed.

It’s a cool feature that makes sense from a discovery standpoint. If you know I’m a power Twitter user that probably follows a bunch of good people, you can now quickly scan the tweets those people send out and see which ones you want to follow.

This is a similar concept to what News.me does for news stories. There, you look at a person’s profile and can see the shared links that they see in their Twitter stream. (It’s also worth noting that Twitter actually had this feature back in the day but shut it off a number of years ago.)

The old “Following” option (a list of users another user follows) is still there under the “People” tab. Here, you’ll also find a “You Both Follow” area, which is nice.

It’s important to note that you won’t be able to see protected tweets from users you don’t follow, obviously. Also worth noting: the feature doesn’t show you exactly what I see since I see my own tweets, but Twitter removes those when you look my following stream (makes sense since I’m not actually following myself — though I would, if I could).

The feature is still rolling out, so if you don’t see it just yet, don’t panic. Just wait longer. If you do see it, here’s my following stream.

Update: One more little discovery bonus. If you look at the upper right corner of the following page you’ll see a “shuffle” icon. Hovering over this reveals the option to “jump to someone you follow”. So you can jump between people you follow and find new people to follow from their streams.

More: Flashback: Two Years Ago, Twitter Killed A Feature — The One They Just Added Back