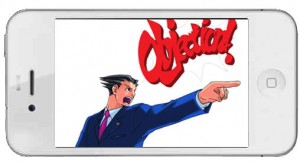 The level of controversy surrounding the beautiful, yet mystical, white iPhone may have reached critical mass today. First, the launch was delayed by ten months, which peeved quite a few Apple fans, to say the least. Then, once the white iPhone finally reared its said-to-be fat head, reviewers had a field day claiming the smartphone was thicker than its black counterpart, which proved false. Today, almost a month after the phone launched, Apple sued a teenager from Queens, NY who had been selling white iPhone conversion kits.

Fei Lam, who purchased white iPhone 4 conversion from Apple manufacturing partner Foxconn, made a whopping $130,000 off the “entrepreneurial” project, selling his kits for $300 a pop. Interestingly enough, Apple co-founder Steve Wozniak was one of many to place an order on Lam’s site, WhiteiPhone4now.com.

The already-settled suit alleges that Lam engaged in deceptive practices, including trademark infringement and dilution, as well as compromising the company’s relationship with its customers by muddling their perception of the official white iPhone release date. “Defendant Lam willfully and without authorization has used Apple’s trademarks in connection with the sale of his ‘White iPhone 4 Conversion Kits’,” Apple said. “Among other things, Apple’s logo and ‘iPhone’ trademarks are used in connection with the promotion and sale of the iPhone 4.”

But Lam wasn’t the only one stung by the suit, as his parents were also named in the complaint. According to Apple, Lam’s parents acted as partners in the sales, and pushed their son to create the business under their supervision. Apple has requested a permanent injunction to stop the Lams from any further white conversion kit sales, and asked the family to turn over any and all profits generated from their enterprise, along with legal expense reimbursement and additional financial retribution.