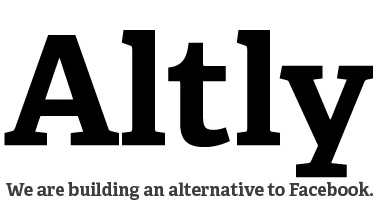 It was almost exactly a year ago that Diaspora started raising money on Kickstarter. A few weeks later, they had raised $200,000 from nearly 6,500 backers. Why so much excitement? Because Diaspora was aiming to be a Facebook alternative. That hasn’t exactly worked out. At least not yet. But now another startup is about to give it a go, Altly.

So why will this one be any different than Diasopra? Well, for one thing, it’s being started by a pretty well-known entrepreneur. Dmitry Shapiro, the founder of Veoh, is also the one behind Altly. While Veoh didn’t end so well (a firesale acquisition after raising nearly $70 million), they were once a very hot property in the online video space.

But even more notably, Shapiro was most recently an executive at Facebook rival MySpace (he worked on MySpace Music).

So why is Shapiro now aiming head-first at Facebook? He outlines the decision in a lengthy post on Altly’s blog. The basic gist? Facebook’s privacy controls are too confusing. And their social graph is now a mess. Oh, and they’re way too big and powerful. Their “tentacles” are everywhere on the web, and this is a problem because our privacy is at risk. Our data is locked in. Etc.

But my favorite reason is this:

At this time there are no real alternatives to Facebook, as most people believe that no one can possibly create an alternative.

Mind. Blown. Well, except for the aforementioned Diaspora. And MySpace, which was once king, and tried to compete with Facebook, but simply lost. And others.

But Shapiro does have a point. As he writes:

There are NO serious alternatives at this time.  For every Coke there is a Pepsi, for every Ford there is a Chevy, for every PC there is a Mac and for every Facebook there is…. a void!  Facebook has such overwhelming power that practically no one believes that trying to build an alternative is possible.

But the problem is that this is not because of anything nefarious Facebook is doing. It’s simply because the rivals that have popped up haven’t been very good. And Facebook, for all its faults, is a very good, and very well-run product.

So Altly will take on this monumental task. And they’ll apparently do so with backing from DFJ.

They seem to be saying the right things. But so did Diaspora. It’s all about the execution. We’ll be watching this one closely, obviously.