Exclusive – In a conversation with TechCrunch writer Jason Kincaid after his panel on scaling fast-growing Internet businesses, Tumblr CEO David Karp talks not only about his lazy dog but also some new product developments that should be going live right about now.

In short, Tumblr has given Directory, where people looking for great content on the network have had the chance to find their fix for years now, a decent upgrade.

As Karp says, Tumblr Directory as a source for unique content and users on Tumblr blogs has gone through a lot of iterations over the years, going all the way back to the introduction of something called ‘Tumblarity’ in May 2009. The biggest problem so far has been finding a way to prevent people from gaming the system.

The new Tumblr Directory is based on two main pillars:

On one side, the startup has developed algorithms to suggest people and blogs to users based on a ton of metrics, and on the other side there will be some sort of editorial spotlight with Tumblr staffers suggesting content that “really stands out”, helped by community activity.

At the rate Tumblr’s been growing, the discovery of great content is certainly going to become harder over time, so let’s hope for the Tumblr community that the new Directory helps obliterate eventual issues with gaming the system for solid content recommendations.

To be perfectly frank, I have no idea if the new Tumblr Directory is already live (Karp mentioned it should be going live “in the next few hours” at some point during the interview) but here’s a screenshot I just took: 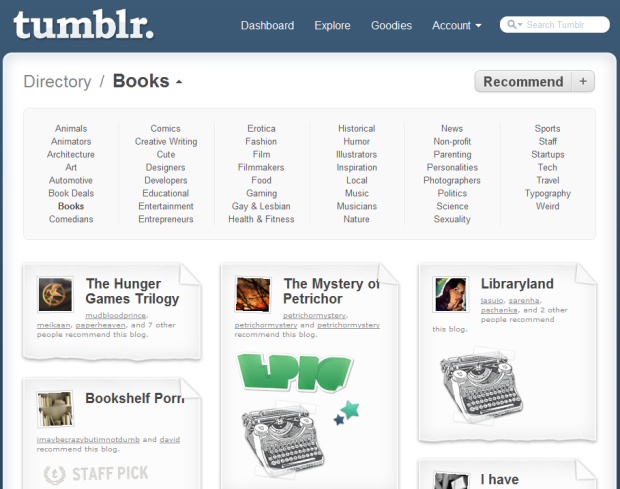