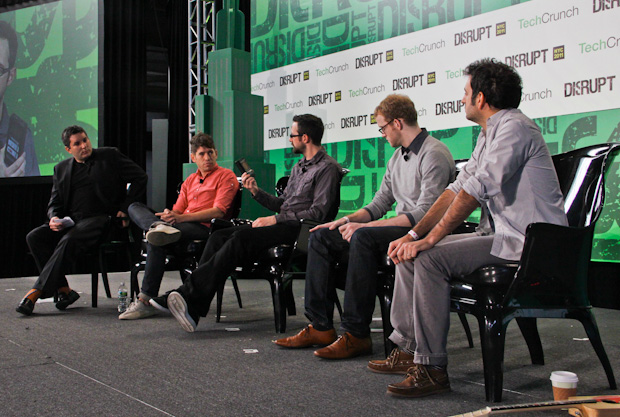 Kickstarter began as a way for bands to fund projects without asking for money from Grandma. Now it’s the go-to site for thousands of self-funded projects and the company recently surpassed the facilitating of $60 million in funding of random music albums, films, and gadgets created by ordinary people.

At TechCrunch Disrupt NYC, John Biggs sat down with Kickstarter’s Yancey Stickler along with several successful Kickstarter gadget makers: Dan Provost from Glif and Cosmonaut, Rafael Atijas of the Loog, and Sean Bonner from Safecast. It was through the magic of Kickstarter that all these gadgets were funded and later created. It’s rather scary to think of a world without the Glif, right?

Kickstarter is a place where projects can be funded by ordinary people. Simply put, it’s crowd funding. Since launching in 2009, Kickstarter has hosted 24,000 projects, with gadgets making up only about 20%. Film and music are the biggest draw. Not everyone is successful, though. Out of that number, only 8,500 have met their funding goal with the majority going to the film category who has seen $20 million; technology and design category has $7 million in successful projects.

The slightly low success rate prompted Yancey to give tips to potential kickstarters. First, use Kickstarter to make an object, not a company. Make something tangible. This is especially true for gadget makers. Second, tell your story about why you’re creating this project and show passion. Rafael Atijas, maker of the Loog guitar, chimed that constant updates and transparency is key. Kickstarter projects are, after all, funded by ordinary people who are often passionate about their “investment” but also about the people involved. Communication is key.

Kickstarter is growing at a rapid pace. The site sees 300 proposals a day and sifts them through a slight filter. Yancey stated that they “don’t fully curate” but there are certainly safeguards in place to ensure projects meet a few criteria — they don’t accept charities. As with many crowd-sourced sites, growth will continue as the site’s reputation grows. The successes of the Glif and Loog sing a great tune for Kickstarter in gadget circles while the five Kickstarter films at Sundance and the Oscar nominated Sun Come Up documentary does the same in that circle.