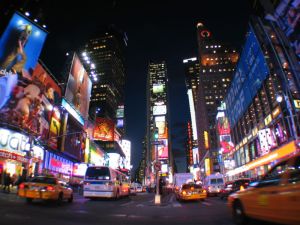 Ron Conway began the discussion by referencing a fairly dramatic change in his own portfolio of companies, saying that only 5 percent of his portfolio was based in NYC 5 years ago, whereas today, that number has grown to 20 percent. He attributed the growing success of NYC as a tech hub to the fact that the city is today seeing the founding of second and third generation companies, which indicates a growing level of maturity (and experience), as well as a stability of the city’s overall startup network, that didn’t exist 10 years ago.

When asked whether NYC now has enough momentum to survive through another down-cycle or bubble crash, which arguably the NYC startup scene of 10 years ago was lacking, Conway said that the difference today is that New York startups have “real business models” and that those companies are building audiences quickly and are monetizing — which is the best insurance policy against a bursting bubble or a significant downturn.

On the other hand, while the global financial crisis of 2008 wreaked havoc on the national economy, and particularly crippled our credit and financial systems (most of which is based in New York), it may have had an upside for startups — even if it is a silver lining.

Eric Hippeau explained that NYC startups’ biggest competition for talent has traditionally come from high paying jobs. Typically, those high paying jobs can be found in financial services, on Wall Street, or in New York’s massive media market. But, because of the dissolution of high profile investment banks and the struggles of traditional media over the last few years, New York businesspeople are discovering that, instead of waiting in line for the next high paying job, they are eschewing corporate environments and opting to start their own companies. “The number of people trying this is gigantic”, he said, “especially compared to the ’90’s — or even ten years ago”.

John Borthwick added that, because New York has always been a fertile ground for media companies, the first wave of web startups in NYC (reflecting the industry as a whole) became “intoxicated” with media services. Yet, 20 or 30 percent of their revenues (proportionally very high) would go to billboards and pushing into traditional forms of media, rather than building infrastructure or innovative, social platforms. Which simply isn’t happening as much today he said. In line with Conway’s assertion, this is due in part to the “bench strength” of second and third generation entrepreneurs and startups. “It’s remarkable how quickly it’s snowballed” he said of innovation in NYC.

Hippeau also attributed the change in the NYC landscape to the current perception that there is “real capital” this time around. Comparatively, in the early 2000s, there were few angel investors and hardly any VC firms based in New York, he said, and West Coast professionals weren’t flying to New York, or collaborating with New York startups. Today, that’s changed, he said, as there is a solid professional angel community and VCs are well-established.

Dixon then cited the recent announcement that Lehrer Ventures would be partnering with SV Angel as a corroborating example of the escalation in cross-continental collaboration. “There’s no longer the animosity between the 2 coasts that there once was, and there’s far more collaboration”, Hippeau agreed.

While the panel collectively agreed that NYC is in a far better position in terms of available capital, a networked community, and a maturity of entrepreneurial talent, Shana Fisher posed an interesting caveat. Until Facebook has a real presence in New York, she said, NYC won’t quite be able to compete top-down with Silicon Valley. Though Google has established a presence, Facebook has yet to claim offices in NYC.

So, with the proliferation of startups building companies based on Facebook’s platform, she sad, without that close connection and ease of communication that they would have were Facebook to have a presence in New York, there’s just not quite the same access or, really, quality in NYC’s social businesses.

Dixon then added that he had talked to Chris Hughes (a co-founder of Facebook), and that he had echoed similar sentiments, saying that, the tipping point would truly be reached (presumably in perception as much as in reality) for the NYC startup and tech scene were Facebook — or the next big web company — to come to Manhattan.

All in all, it was a very interesting discussion, and contained some very positive outlooks for NYC — even rallying points — for New York startups. (Though some might call it spin.) The whole video is below, so be sure to check it out: