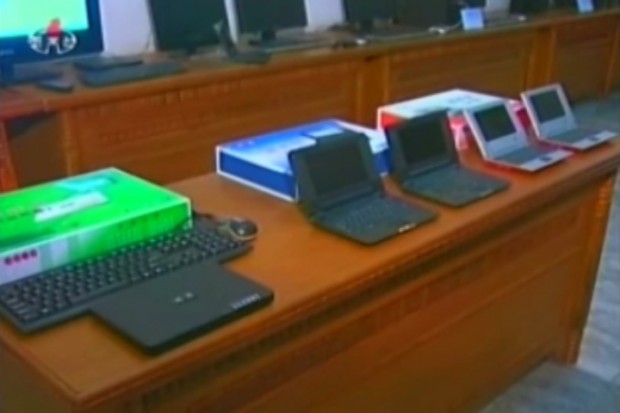 A recent evening news report from North Korea showed the insides of a computer manufacturing facility, where the country claims to be developing its own PCs. A little digging has shown that one of the laptops in question is actually a super-low-cost netbook already on the market here in the US, but buying OEM hardware doesn’t mean they aren’t working on something of their own. The other PC, for instance, appears to be a bit more customized, and is made to attach to a TV, presumably to reduce cost of entry among the generally low-income households (if low-income is the correct term in a communist economy).

The TV-computer and one of the laptops are aimed at education, allowing for transmission and interaction with instruction videos, dictionaries, language programs, and so on. The office computer has the usual office apps and a browser.

A spokesman said “The devices and programs of these computers were designed and developed purely using our own expertise,” and the report shows them being assembled, but the discovery of the Sylvania netbook seems to give the lie to that idea at least partially. On the other hand, the OS looks original, and may be the Red Star Linux variant they’ve been working on.

Other countries, like India and China, are also exploring the idea of manufacturing and programming their own computers, in order to reduce reliance on western corporations like Intel and Microsoft.

More screenshots of the report can be found at North Korea Tech.