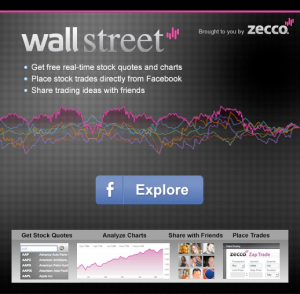 When it comes to public interaction with the stock market, the ability to trade stocks online has completely changed the game. With abundant financial information on the Web, through a little research, more people than ever before have joined in on an activity once reserved for a relationship between the broker and a trader. If you trade online, you may have used ETRADE or TD Ameritrade, or a host of other sites, or you may use Google Finance or Yahoo Finance to do your research. But, of late, we’ve seen the social trend hitting online trading, as it has for so many other spaces — for better or for worse.

Last year, rapidly-growing online brokerage company, Zecco, launched the first part in an effort to crank online trading into the next gear: Allowing online stock traders to trade anywhere on the Web, whenever they feel so inspired. This took the form of Zap Trade, which was released in conjunction with StockTwits, the growing social micro-blogging and trading service, as a widget on the StockTwits site and as a Firefox add-on. The Zap Trade widget allows users to place trades from StockTwits or directly from the browser.

Today, live from TechCrunch Disrupt in New York, the trade-where-you-want-when-you-want parade continues, as Zecco launches the appropriately named “Wall Street”, which the company says is the “first and only” Facebook app to offer realtime stock quotes, charts, and community discussions on Facebook . And, my friends, not only that, but the Facebook app allows you to make stock trades directly from Facebook, using a compact trade ticket, without ever having to leave the friendly confines of Facebook.

Besides allowing the access to realtime stock data and to make trades within the app, the Facebook integration gives both amateur and expert traders alike the ability to “Like” a stock and to thereby stay tuned on the stock’s latest developments, as well as to see which stocks your friends “Like”. So that you can then publicly ridicule them on their Facebook page, or covertly buy that stock as well. What’s more, the app allows you to comment on a stock, participate in discussions, and share investment ideas with specific Facebook friends. 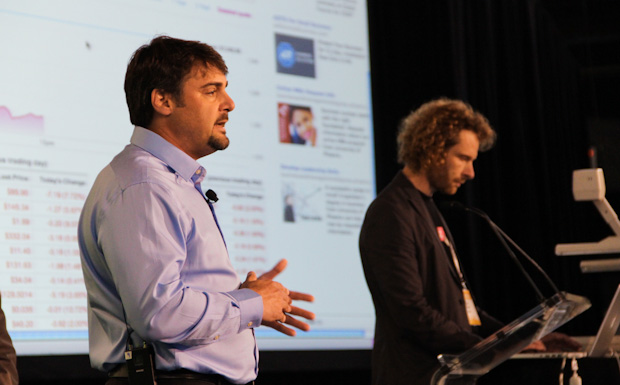 On stage today at Disrupt, Zecco CEO Michael Raneri allowed Erick Schonfeld to make what he says is the first-ever online stock trade on Facebook. ZOMG! The CEO showed off the Facebook app’s realtime quotes and charts, which you can see in the image to the left. 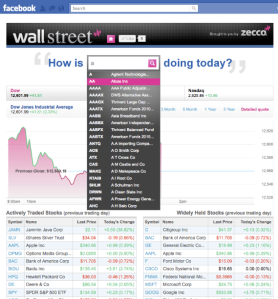 Beyond trading specific stocks, say that you want to search for wider market trends, Zecco’s app allows you to not only get free quotes and charts on any number of stocks or ETFs, but also lists of the previous day’s most actively and widely-held stocks, so that you can see how risky or safe a stock is compared to others in the market. The app looks great and seems very easy to use. It may take some time for people to get used to the idea of making stock trades on Facebook, considering many people tend not to use the social networking site for financial services, but I think it’s pretty neat that stock trading and free market data has finally come to Facebook — now I can stalk ex-girlfriends and trade my ETFs in one fell swoop. Now, that is something worth writing home about.