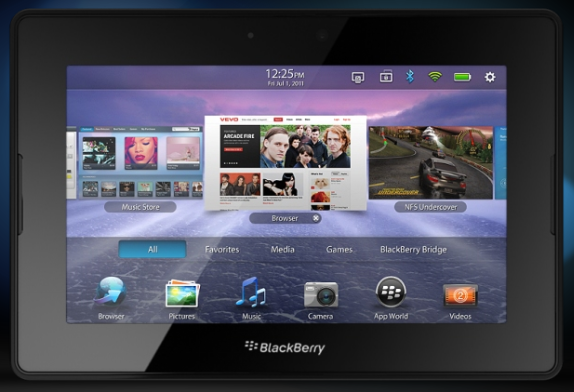 Just a few days after the BlackBerry PlayBook’s one-month birthday, the nation’s top two carriers are still pretty ambiguous in their adoption of the device. AT&T has yet to approve the BlackBerry Bridge app, which turns the tablet into a portal to any BlackBerry smartphone. Meanwhile, Verizon still isn’t convinced it should carry the RIM tablet, at all.

In response to a Wall Street Journal inquiry about Verizon’s stance, Verizon spokeswoman Brenda Raney noted that “nothing has changed,” and offered no time frame as to when the decision would be made. Back in March, before the PlayBook’s launch, RIM included Verizon on its list of carriers to offer the 7-inch slate. Also on that list were AT&T and Sprint, despite the fact that none of them have begun selling the tablet.

While Verizon hangs out on the fence, AT&T still hasn’t approved RIM’s BlackBerry Bridge app. Without it, the PlayBook loses some of its most important functionality, including email, calendar, and contacts applications. More importantly, without the Bridge app, the tablet can’t tap into a cellular connection, and must then depend on Wi-Fi. On the app’s approval progress, AT&T spokesman Mark Siegel said, “we’re still working on it.”

AT&T now faces the question of whether or not the Bluetooth connection forged with BlackBerry Bridge should incur a normal tethering charge. “The principle is to make sure [the BlackBerry Bridge app] works well for our customers and whether it should be considered tethering,” said Siegel.

This BlackBerry Bridge mess has been a particularly poignant topic of debate since the device’s launch, with most deeming the product somewhat half-baked. Grumbling of that sort should come to an end soon, though, as RIM is expected to release a newer model of the PlayBook with a network connection, and native email, contact and calendar apps. With a handful of strong Android tablets on the market and Apple’s iPad absolutely dominating the tablet race, RIM has certainly struggled in this sector.