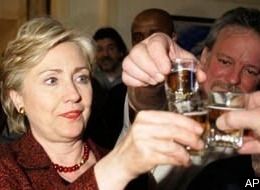 For me, the highlight of the event is when Heather and Mike take to the stage and announce that they’re selling the company to someone ridiculous (this year my money’s on 4Chan!). For the rest of you, though, I know the real reason you sit glued to the live stream all day is to play The TechCrunch Disrupt Drinking Game.

You should know the rules by now: round up some friends, grab a bottle and follow the simple instructions below. Or as the Bard would have it said: Blow, wind! come, wrack! At least we’ll die with vomit down our shirt!

Good luck everyone. And do make sure to follow me on Twitter for minute-by-minute commentary of the day’s nonsense. It’s like actually being in the room (sitting next to a dick).