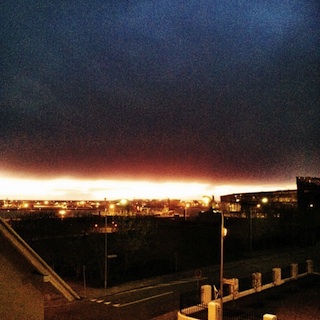 TechCrunch Disrupt kicks off in New York City in about 3 hours. So naturally I’m sitting in a bar in Iceland.

Why? Well, the entire story is kind of long and many parts are probably more appropriate for a Paul Carr book than this post. But the keyword is “Grimsvotn”.

Yes, it just so happens that a giant volcano under Vatnajokull (Iceland’s largest glacier) decided to give us the biggest eruption in over a century on Saturday. Obviously, this um, disrupted, my Sunday flight to New York City. So here I am.

While they’re now saying that the fallout should not be as bad as the Eyjafjallajokull eruption last year, they’re also not entirely sure yet. A lot of it depends on the wind. Apparently, if you fly with ash in the air, the mini furnaces that propel jets tend to make glass in those engines. Not good.

I might be able to leave tonight or it may be a week. Regardless, I won’t be on stage doing my scheduled panels at Disrupt anytime soon. Nor will I get to be there to watch all of the really awesome group of startups that will be launching over the next few days. Nor will I be there for our excellent group of speakers and panels. Nor will I get to enjoy free, sponsored drinks with all of you fine people at night.

Clearly, this post has little to do with actual tech — though, if it matters, Grimsvotn has also disrupted key people from Google, Microsoft, Twitter, Pandora, a handful of other startups, and a few VCs from their jobs. And yes, if we are here a week, we are talking about holding a makeshift TechCrunch Erupt conference.

But I will use this post as a reminder that, awesomely, we will be streaming Disrupt live once again this year. So not all is lost for me. Hopefully you’ll join me in watching the stream here (we’ll also embed it when it does start).

And yes, the photo above is very real. I took it from our balcony last night in Reykjavik.