Wandering around here at TechCrunch Disrupt New York, we came across a particularly interesting iPhone 4 add-on from Kogeto, in collaboration with Kickstarter. It’s called Dot, and it will totally change your perspective on mobile video, literally. The Kogeto Dot is a panoramic lens that captures 360-degree video, without sacrificing style or portability. This add-on from Kogeto comes in a number of pastel colors and is small enough to tuck away in a purse, or even keep in a pocket. 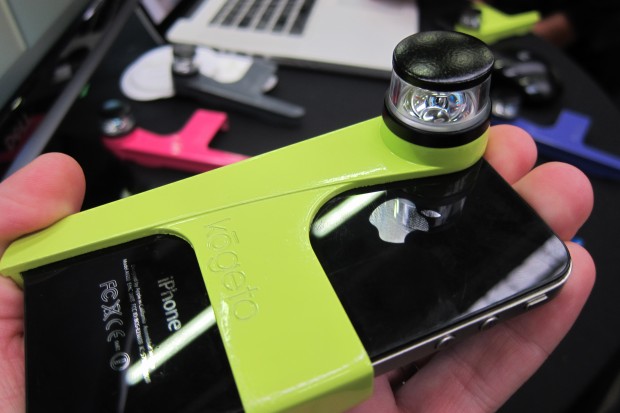 The Kogeto Dot comes with a complimentary iOS application that un-distorts the video for watching, sharing, or real-time web broadcasting. There seems to be a minor distortion issue as of now, but that should get cleaned up if/when the product hits its funding goal. Most everything about this add-on is pretty impressive at a first glance, although I’ve found myself questioning ease-of-use. If the iPhone has to be face-down to shoot 360-degree video, there’s no way to catch a glimpse of the video until after recording has stopped. That may not make much of a difference in some cases, but it’s hard to imagine shooting video without the ability to watch it.

The founders are asking for minimum pledge of $1 on Kickstarter and $98 snags your very own Kogeto Dot. That may seem steep compared to lower-quality, cheaper panorama add-ons, but it’s ultimately your decision whether or not the price tag outweighs the perks.