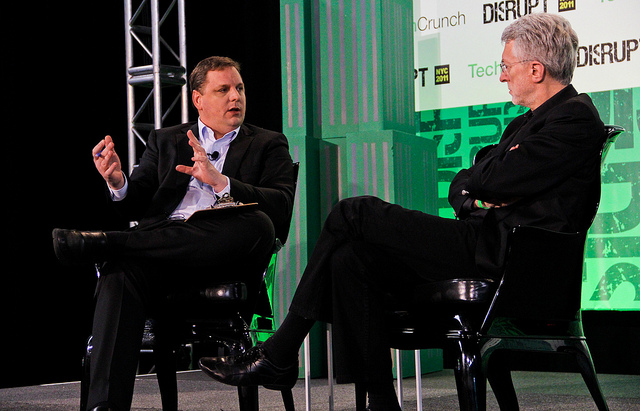 Jeff Jarvis is the creator of Entertainment Weekly, a San Francisco Examiner columnist, the Associate Publisher of The Daily News, and a consultant to new media companies — in other words, a veteran of the old school and a proponent of the new. Jarvis took to the stage today at Disrupt NYC for some banter with TechCrunch Big Kahuna Mike Arrington. The two writers talked about their past, including Jarvis’ history of calling out Arrington publicly for saying the New York Times was in the pocket of a startup, among other things. As such, their conversation was candid and casual, and focused on the fluctuating definition of what a journalist is (and what it should be) in the age of new media.

To kick things off, Jarvis flatly asked Arrington (full disclosure: Mike is my boss) about whether he would consider himself a journalist. Mike replied by saying that he does not consider himself a journalist, likening the current identity of journalist’s to that of priests. “When I think of journalists”, he said, “I think of people who are biased, hiding their bias between theoretically objective text”. That is to say, journalists misappropriate words like “objectivity”, and sometimes tend to be self-righteous about their role as objective observers (my words), when in fact, all reporting is advocation. And, inherently subjective. (Again, my words.)

To elucidate, Arrington then cited the example of a particular journalist telling him that he would not share his political leanings, or how he voted, because it would negate the objectivity in his reporting and how people viewed his content. Both writers were in agreement that this is a common misrepresentation among journalists today — that true objectivity is “bullshit”. Instead, Jarvis said, paraphrasing David Weinberger, that “transparency is the new objectivity”, that being transparent about one’s investments and personal affiliations should be standard in presenting content to one’s readers, and is what readers should expect. But it not exactly tantamount to calling one’s self “objective”, at least in the way the term is used by many journalists today.

Arrington then asked Jarvis if a reporter covering Obama should, say, disclose their political affiliation in the footer of the column. Jarvis said that he thinks they should, and that he has had similar conversations with various editors, including at the New York Times. Those he’s talked to tend to disagree, saying that their best arguement being that if one’s personal philosophies are reduced to a single word, like “Democrat”, it is counterproductive to reporting. Jarvis cited the example of a reporter covering religion and disclosing that they used to be a Catholic — in the end this information is irrelevant — just because someone is Catholic, doesn’t mean that you can immediately deduce exactly where they come down on the issue of, say, abortion.

Jarvis went on to say that the architecture of journalism is beginning to mimic the Internet, in that journalists are becoming curators of a conversation that would go on without them; it is a matter of adding value and plucking the best parts of news and conversation that a journalist may not be breaking themselves. Even though journalists may like to think otherwise. Therein seems to lie the reason why there continues to be a perceived gulf between “journalists” and “bloggers”, even though the differences today, thanks to the Web, are far more nuanced.

The two then went on to discuss the validity of Arrington investing in startups that he and we other writers at TechCrunch cover frequently. (Mike discussed the change to his investment policy in a recent post.) Arrington then touched on an announcement that Arianna Huffington made on stage in an earlier panel, in which he revealed that the two are in talks over creating a site (presumably among prominent bloggers and journalists), in which issues like disclosure and (as Mike said) “whether he has the right to do what he does” will be discussed at length.

Arrington asked Jarvis to participate, and also mentioned that they are interested in bringing Jay Rosen into the conversation as well. It is the beginning of a long discussion about what journalism and blogging will look like going forward, and how they (could one day?) exist symbiotically from top to bottom.

For more, check out the whole video below: