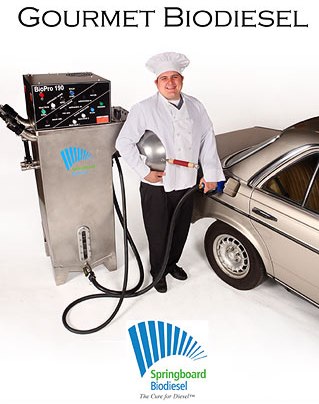 Passionate biodiesel hobbyists have long relied on their local diner’s supply of used cooking oil to power their cars, but a unit that automatically converts oil to fuel could help restaurants do it themselves.

The BioPro 190, made by Springboard, is a tall stainless steel box containing a biodiesel processor that that mixes, heats and separates used cooking oil, producing ready-to-pump biodiesel in about 48 hours. Both animal and vegetable oils can be used, and though the oil requires the addition of methanol, sulphuric acid and a catalyst to be processed, these are the only steps in the recipe to to fueling any diesel-run vehicle. While vehicles typically require biodiesel conversion to run on on biofuels, Springboard claims their fuel can power any diesel engine without being converted.

This could be a big step forward for biodiesel which is often inconsistent in quality when manually produced. It could also provide a new revenue stream for the restaurant industry.

BioPro 190 units sell for $9,995, but buyers will have to find suppliers for the sulfuric acid, methanol and catalyst to mix with their cooking oil on their own. A smaller BioPro 150 model sells for $5995, with an additional charge for a fuel pump.

This video demonstrates the machine in action: