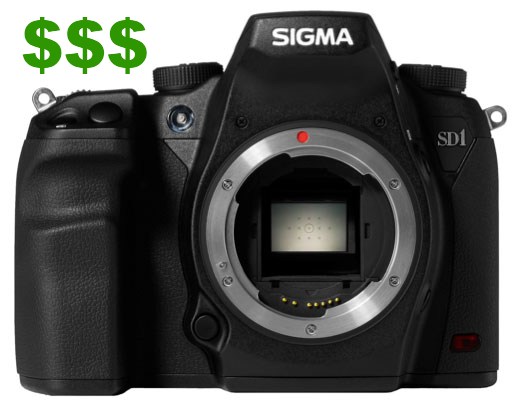 We heard about the SD1 back in September: a Foveon-based DSLR with 45 megapixels, as they define them, though the “megapixel” rating is difficult to compare when you have different sensor patterns going on. They’re confident enough to price this thing above even Canon and Nikon’s pro level cameras. Yes, it’ll set you back $9700. That’s $2000 more than a 1D mk III and $4000 more than a D3X or S.

Sigma is hoping that it’ll be picked up not as a superior pro camera but as a cheap alternative to medium-format brands like Hasselblad and Leaf. But there are a few problems there:

Unfortunately for Sigma, I just don’t think the camera will be a hit at that price. It has a lot going for it, but when you’re putting it up against cameras four times the price while at the same time missing features available on cameras half the price, you’re not going to make a lot of friends.