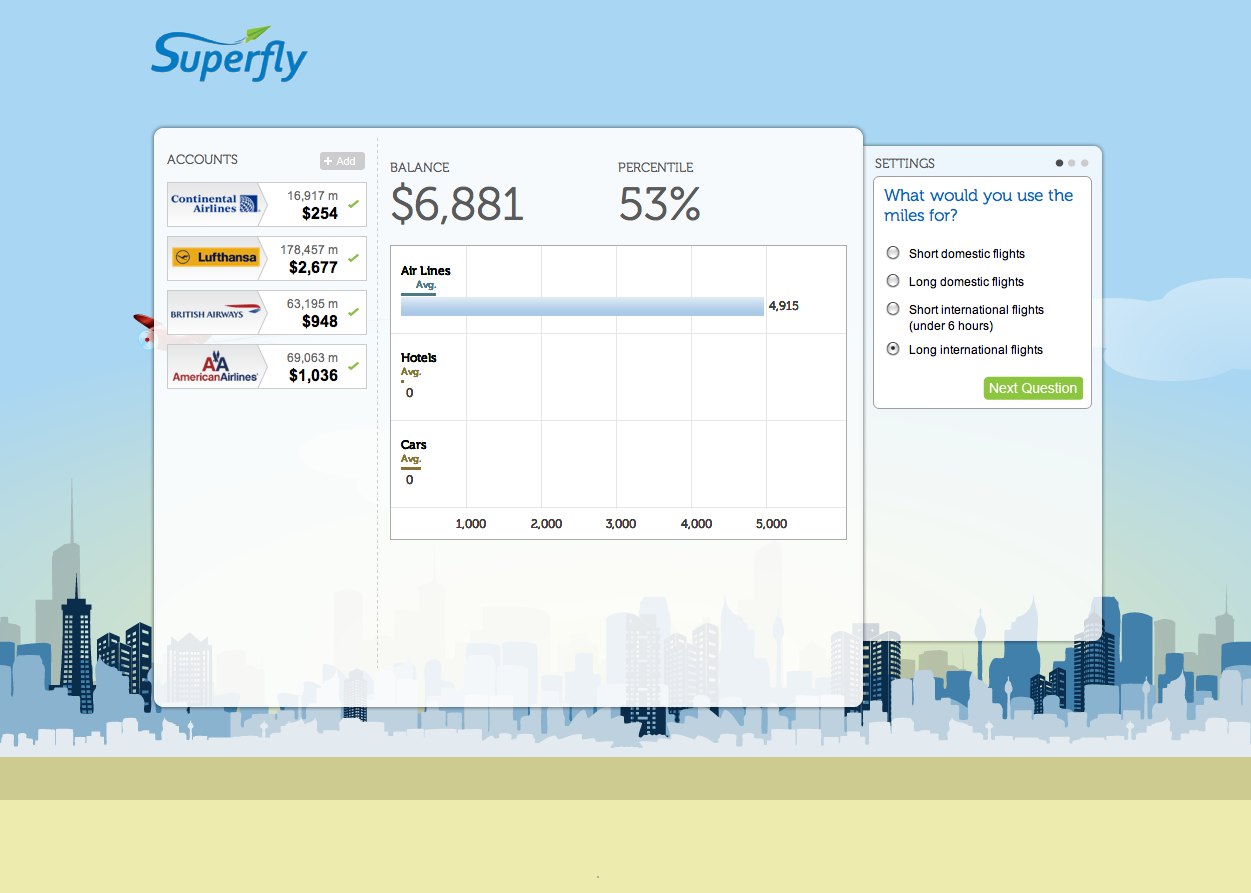 If you’ve seen George Clooney and Jason Reitman’s Up In The Air, you know that George Clooney’s character in the film is the epitome of a savvy, frequent flier. His life’s ambition is to accumulate miles, and he knows exactly what his rewards packages entail. Most of us, though we may similarly heavy travel schedules, are by no means masters of miles or travel rewards. If you’re anything like me, you can’t even remember which mileage programs you’ve enrolled in. Thus, Superfly, an Israeli startup emerging from beta today, wants to help you become more like George Clooney’s character in Up In The Air — and less like me. (Always a good thing.)

Armed with a new domain, new design, and fresh funding, Superfly’s goal is to not only help users organize travel rewards (be they frequent flier miles or hotel rewards), but actually educate users on how to use them to maximize their value. According to Superfly, there are currently between 17 and 22 trillion unused miles and points floating around travel accounts today, and these points are valued at between $500 and 600 billion.

Clearly, while users are spending a great deal of time traveling and accumulating miles, they’re not making use of them. This is largely due to the fact that airlines craftily make it difficult to understand and appreciate the value of the rewards, where and how to redeem them, etc.

Superfly is mainly targeting under-40 business travelers that carry multiple reward cards, aiming to make their lives easier by tracking their reward balances, rate of accrual, while managing the various terms of airline policies, to put concrete dollar values on their rewards. The startup does this by aggregates a user’s travel information and running a comprehensive analysis of users’ travel habits, plotting their behavior patterns against available rewards programs.

Superfly offers a simple interface that displays miles earned over time, as well as spending patterns, that make it easy to see how close one is to achieving various rewards. The startup’s platform then serves you suggestions as to airlines, accommodations, flight times, and more that will help maximize miles and rewards earned.

The startup plans to monetize by charging credit card companies and airlines for referral when a user takes their suggestions. Founders Jonathan Meiri and Zviki Cohen estimate material revenue per user at about $29, even through the service is completely free.

Superfly recently closed a seed round from a number of high profile angels, including the founders of Israeli tech companies like NESS, and 888.com CEO Gigi Levy. The startup has brought in $600K to date, and CEO Jonathan Meiri said that the startup plans to have 100 million-plus miles under management from launch.