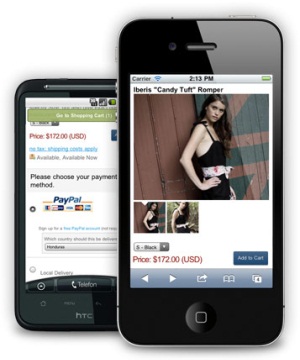 Jimdo, a service that lets anyone create a good-looking website without too much effort, is on a roll. The tool has now been used to build over 4 million websites, and 200,000 more Jimdo-powered sites get published every month.

Last year, the German startup behind the service rolled out a feature that let anyone create an online store, quickly and easily. Fast forward 15 months and 40,000 online stores have been built using the service, generating more than 7.5 million euros in sales.

Today, the company is debuting a mobile-friendly view for optimized display on iPhone, Android handsets and other smartphones, which works for all Jimdo websites. In addition, all 40,000 online stores will have a mobile store with mobile checkout. Click a Google Map in the mobile view, and the native Google Maps app will open on your phone.

Jimdo has more in store: next week, the company will announce Dropbox integration, enhancing the website building application with a digital file center in the cloud.

The startup currently boasts offices in Hamburg, San Francisco, Shanghai, and through cooperation with KDDI Webcommunications, also in Tokyo. There are about 70 people working for Jimdo today, and co-founder Christian Springub just relocated to the United States to more efficiently attack the North American market.

Furthermore, Jimdo is a profitable business today, although they declined to share absolute revenue numbers. Either way, their momentum is noteworthy, especially when you consider how much capital was raised by rivals Wix ($58.5 million) and Yola ($25 million).

Jimdo, in contrast, was built on only 500,000 euros (roughly $715,000). When United Internet invested in the company, more capital was available, but the management team actually moved to buy back the shares back in 2009.