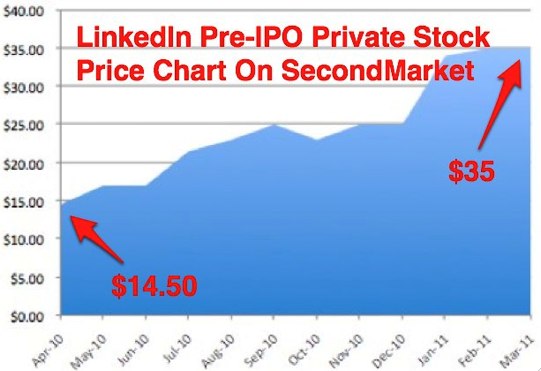 Now that LinkedIn has stock is trading publicly,, you can buy and sell shares of the company on the New York Stock Exchange. But its shares have traded before privately among wealthy individuals and other accredited investors on secondary markets such as SecondMarket. The chart above shows the price history of LinkedIn’s stock between April, 2010 and March 2011 on SecondMarket .

Here’s the exact data from SecondMarket on LinkedIn’s share value from April of last year:

So what does this mean? Basically, it shows the difference between private and public markets. There is very little relatively liquidity on SecondMarket; and it took a year for shares to double in value. Shares for LinkedIn on the public market more than doubled in value on the first day of trading.

Seeing how LinkedIn’s stock performed on public markets vs. on private markets has to make you wonder how much Facebook’s stock will be valued at in the public markets. On SecondMarket Facebook’s valuation has come as high as $85 billion, or $34 per share. There’s no telling how hot Facebook’s public stock could be considering that it is minting money and has 700 million users worldwide (LinkedIn has over 100 million users).