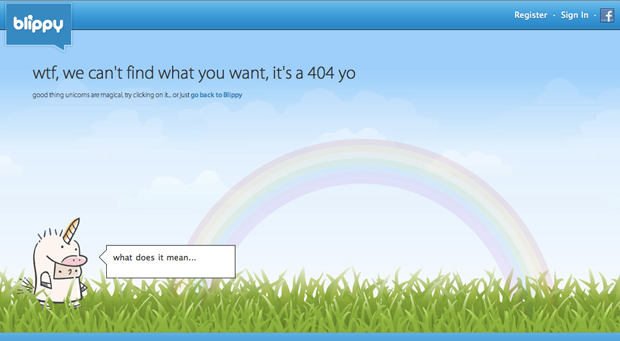 So it turns out that almost nobody wants people to check out their purchases. And also that just adding a social element to a feature isn’t enough to make it useful. The lessons of user adoption are sometimes learned the hard way.

“Imagine being able to see everything your friends buy with a credit card as they do it,” MG wrote. “This not only tells you what kind of things they’re actually into (rather than someone just saying they like something), but also other information like how cheap they are, as well as where they actually are at a given time.”

What we failed to ask was, “Who cares?”

Blippy raised almost $13 million in funding and at some point its valuation was at $46.2 million, with enviable investor David Hornik posting his $8 million dollar purchase of Blippy stock on Blippy itself.

Even Apple copied it, taking the concept of purchase sharing over to its (also failed) social music service Ping. But underneath all the sloppy kisses it seems like people were more in love with the Blippy concept (and the irony of its association with charismatic FuckedCompany founder Philip Kaplan) than the Blippy practice.

According to CEO Ashvin Kumar, and depending on what analytics service you’re using, Blippy traffic would spike whenever press would cover it and then subsequently die down to levels that showed no signs of steady growth. A trip to Blippy meant that you’d see your friends, but they were like bizarre versions of your friends that never did anything. I signed up for Blippy and didn’t share one teensy eensy purchase. But the site was innocuous enough.

And then in April of last year Google Search results revealed that credit card numbers of a few Blippy users, and the resulting media spiral unsurprisingly caused a huge spike in Blippy traffic but tainted the service with an aura of mistrust. Despite Blippy’s sincere apology many rushed to delete their accounts.

Things eventually quieted down as they are wont to do in media hype land. And then we kind of stopped writing about it, caught up in the hockey stick growth of Groupon and Facebook and Quora. We stopped writing about it so much so that we missed the fact that it pivoted from a purchase sharing site to a user reviews site, starting with the introduction of user reviews on July 23rd 2010 and then moving fully on to reviews by October of the same year.

“One of the reasons we switched to reviews was to increase user engagement, but that hasn’t really increased either, “ Kumar told me resigned, revealing that Blippy has 100K registered users and that 30% have shared a purchase — Numbers that are not spectacular. The service never had a clear business model, just an attitude of “get user adoption and we’ll figure it out later.” But later never came.

What did come was the sense (and the whispers and the TechCrunch tips) that Blippy was over and that it was time to move on. For co-founder Philip Kaplan this meant stepping down to go make a bunch of silly iPhone apps at the end of March, telling PE Hub’s Connie Loizos that Blippy was “doing better than most people could do … But it hasn’t, like, exploded into something huge yet.” Which basically meant that traffic had leveled off. And the loss of its figurehead left many, ourselves included, concerned about the service’s future.

Well the truth is it doesn’t have much of one. While there are a few rays of hope (Blippy gets a lot of traffic from Google as it relates to mobile products) there was no clear direction to shine them in. Said Kumar, “The decision was whether to focus Blippy on mobile products or try something new and we made the decision that we wanted to try something new… Our key product metrics haven’t gone up, we iterated a lot but not enough to create significant user adoption, at least not enough to warrant us spending more time on it.”

Kumar also told me that the Blippy team has stopped innovating upon Blippy, and has moved on to other products in the social ecommerce space, but that it isn’t ready to reveal anything publicly yet, “We’re basically taking the things that we learned from Blippy and applying it to a new set of projects. All of them which are in the early stages,” Kumar said. The crazy connected investors behind the project are super supportive he said.

“So should I put RIP Blippy in the headline of this post?” I asked Kumar “No. When people say Blippy I still associate Blippy with the company, and not the domain or the product that’s on the domain,” he replied, optimistic about the company’s new direction whatever it may be. For the record Kumar hasn’t shared a review on Blippy for over a month.

But hopefully he’s taken to heart the real reason Blippy didn’t work: Sharing purchases with friends doesn’t solve a problem. Challenge: Try to figure out what problem Blippy solves, or for that matter what Ping solves or what competitor Swipely solved (“We don’t think people want to share their purchases period,” Swipely CEO Angus Davis told me after his service had pivoted, “I don’t know how to be more emphatic than that. “)

All three went up against the number one rule in the startup ecosystem, “Make something that people want.” And lost.