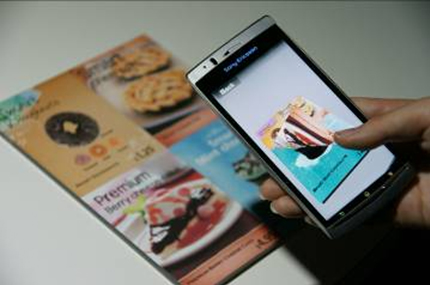 Sony has been working on Augmented Reality technologies since 1994, and today the company took the wraps of “SmartAR”, a so-called integrated Augmented Reality solution. The company says their technology has four distinct advantages when compared to existing AR solutions.

First, SmartAR doesn’t require markers to work, which, by itself, isn’t really new for an AR solution. Second, Sony says objects can be identified and then tracked at high speed, thanks to a combination of advanced object recognition, matching and image tracking tech (as you can see in the video, SmartAR works very well in this regard).

Third, SmartAR is specifically designed for 3D, meaning the technology can identify 3D structures to let objects blend in smoothly (also when moving the camera). And fourth, Sony seems to be pretty proud of the SmartAR UI, which makes it possible for users to easily interact with virtual objects, for example to turn pages in a virtual menu via touch control (pictured above and shown towards the end in the video below).

Official Sony SmartAR video (text in Japanese, but that doesn’t matter to much in this case):