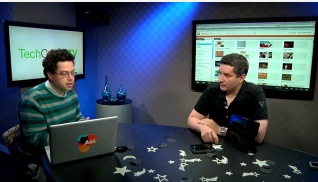 This week Erick and I received two invites to the Google Music Beta and I also discovered that Erick is a secret 90s classic rap fan who used to drink the brass monkey while whiling away the hours in his college dorm room. Who knew?

We also tried out the new Seagate GoFlex Satellite wireless hard drive and discussed why I loved the New Yorker iPad app so darn much. Plus, at some point in the show, a rep from one of the three companies comes on to respond to our verdicts (we don’t know who it is until he shows up, which is part of the fun).

You can watch two clips from the show (including a detailed hands-on of Google Music) or you can watch the entire episode below, featuring all three products.