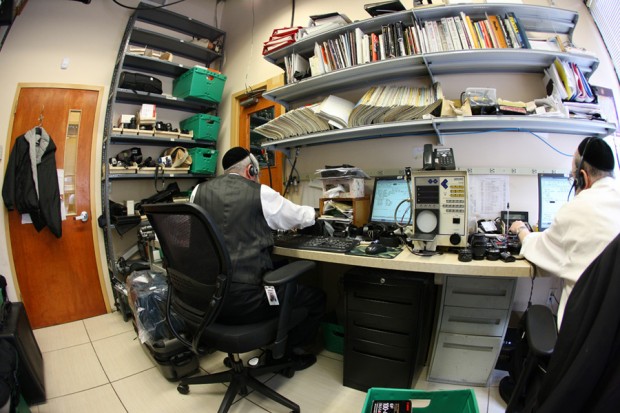 A photographer named Linhbergh Nguyen bought a camera from B&H photo in New York, a camera store run by Satmar Hasidic Jews in a manner that more resembles Katz’s Deli with its arcane ticketing/receipt system than a retail establishment. On the camera he found some shots inside what appears to be a testing lab in the store, which is interesting but not the real draw.

What’s missing here is what the store conveyor looks like inside. See, when you pop into the shop, you pick the item you want, the clerk has it brought up, and then you get a slip to give to the cash register folks who ring you up. Then the item you bought is stuck onto a little conveyor that dumps the purchase out at the front where you hand over your receipt and grab your prize. It’s basically the most convoluted anti-theft system you’ve ever seen and seems to be a holdover from the old days when everything in the store was behind the counter.

Anyway, the photos are pretty cool and it looks like those guys are having a blast talking cameras and rocking out to AC/DC or whatever they have on those headphones.