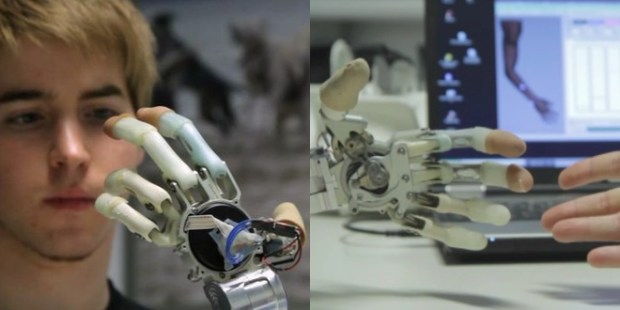 Body augmentation and limb replacement are just hugely interesting fields right now. We’ve got bionic legs, bionic eyes, even bionic cats. Bionic hands have been a troublesome topic for research because of the inadequacy of current technology in replicating fine motor control. This arm, being wielded by a young Austrian fellow who lost the use of his hand in an accident, isn’t quite perfect, but it sure is impressive as hell.

As you can see in the BBC’s video, he won’t be playing the piano any time soon, but replacing limbs isn’t about that — it’s about getting basic functions working again, like holding a glass or tying your shoes. Both of those things seem totally doable, and I’m sure stuff like pressing buttons, holding a shopping basket, and other common tasks are equally possible.

This is a neuroprosthetic, meaning it actually taps into the unused nerves that used to control the hand. At this point we can’t tap into too many — our electrodes and mechanics just aren’t good enough — but there are enough that you can have several degrees of freedom and analog control, which is goddamn amazing. There’s a ton of room for improvement, which isn’t a criticism so much as an aspirational statement. In just five or ten years these things are going to be looking real nice.

There’s more information at the BBC story, including some other researchers and bionic limb users. Exciting times, people!