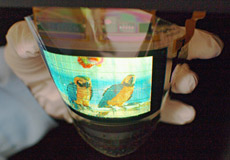 It’s not the first flexible screen we have covered in recent years, but it’s the first one from Toshiba. The company has developed a 3-inch OLED panel that’s 0.1mm thin and weighs just 1g (pictured). Apart from the size and weight, the main selling point of the OLED is that it can retain picture quality over a long period of time, according to a recent report in The Nikkei (Japan’s biggest business daily).

Toshiba didn’t specify what they mean with “long”, but they did say how they created the display: apparently, the OLED is built by attaching an oxide semiconductor TFT to a plastic substrate at 200 °C (instead of a glass substrate that has to be handled at 320 °C). As a consequence, the new display is 90% lighter than comparable ones using a glass substrate.

Even though the TFTs were handled at a lower temperature than usual, Toshiba claims the display can be used over time without experiencing screen burn-ins, loss in contrast and other problems.

The company hopes to use the new production method for super-thin (and larger) displays than can be rolled up and carried around by 2014 or 2015.