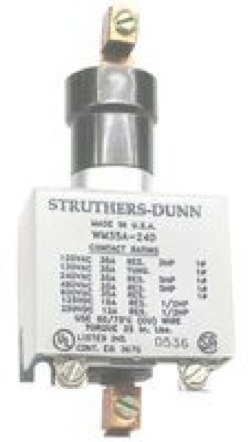 Looking for a transistor or a relay? Or possibly an oscilloscope? More than likely you’ll end up at Octopart, a vintage Y Combinator startup that launched in 2007.

The company is a search engine for electronic parts, allowing users to navigate through a taxonomy of structured stuff, or just do a plain old parts name/number search. Once you find what you’re looking for, Octopart will show you a variety of distributors who sell the part and their prices, along with a link to go buy it. Here’s the most searched item on the site.

The company is small, but growing and profitable. While the company won’t disclose revenues, about $10 million a year in commerce flows through their site, they estimate (meaning end purchases at distributors via referrals from them). Octopart generates revenue from those referrals, and through display ads on their site.

And it has a great story of how it got here.

The company was founded by two physics Ph.D dropouts, Andres Morey and Samuel Wurzel. They added a third physics Ph.D dropout, Harish Agarwal, later during the Y Combinator process. They raised a modest $300,000 angel round in 2008 from notable investors, but kept the team to just the three of them. Monthly expenses, other than their salaries, were just $700.

In late 2008 they had another round of financing lined up and about to close. But that $800,000 angel round dissolved during the late 2008 venture capitalist “oh crap it’s 2001 all over again everybody run for it!” meltdown.

The round never closed. The company was out of money. Anyone with any sense at all would have gone back to the warm, safe, inviting Ph.D program cocoon that they so hastily left the year before.

Instead, they cut their salaries to $0 and focused on finding that $700 every month to keep the servers up. Lean times.

But then things started to change, Morey tells me. Traffic increased organically. They closed more paying deals with distributors. Something like critical mass was achieved, and real revenue started flowing in. At least, enough revenue to allow them to pay themselves salaries.

And then more visitors showed up, clicking more results, and more revenue came in. Today Octopart has half a million monthly unique visitors, says Morey. And those are solid gold looking-to-buy-something-right-now unique visitors, the kind that bring in revenue.

“We hired our first employee, Bryan Newbold (a new MIT physics grad),” Morey told me today, adding “And we just signed up Mouser Electronics which means we have deals with all major distributors of electronic parts.”

Octopart isn’t sexy like a lot of startups. It’s boring, and practical (words Sarah Lacy used today to describe LinkedIn). But boring and practical, when combined with pretty awesome search technology, can make a fine business. Especially when the founders aren’t quitters when things get tough.

Well, actually, they are quitters, since they all dropped out of grad school. But they’re not quitters now, and that’s all that counts.