Display conference SID is underway, and all the cool companies are showing off their new display tech. Yesterday we saw a sweet high-resolution bistable e-paper display from E-Ink and Epson, and today Engadget has found another cool screen, also bistable, but slightly more… clear. 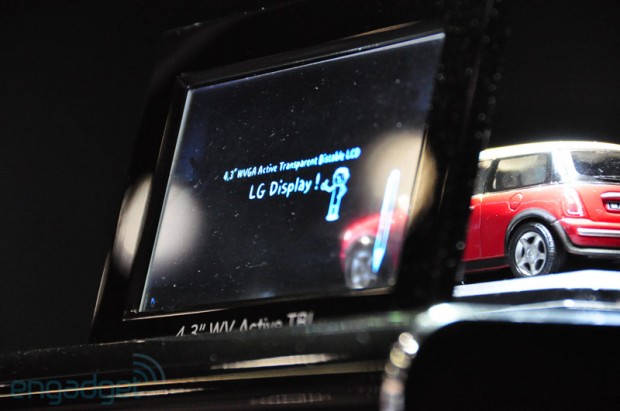 Yes, it’s transparent and bistable. Just add “flexible” and “high pixel density” and they’ll have all the buzzwords covered. The low-power display is able to show full motion in monochrome, and of course because it’s bistable the image remains when you turn it off.

What are the advantages over, say, an OLED display? No clue. The device shown is just a concept (a prototype, really), but whether it’s an evolutionary dead end or just the start of something cool isn’t really stated. At any rate it’s cool. If you’re interested in more display stuff, Engadget’s SID tag has a bunch of semi-interesting stuff — not all of it mind-blowing, but still worth a look if you’re into that kind of thing.