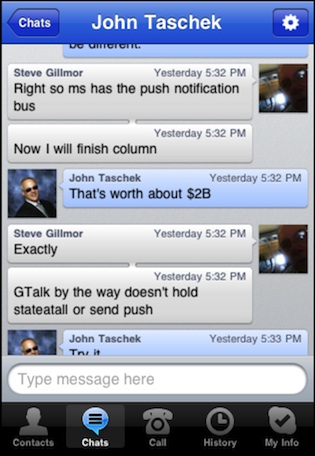 At 35 thousand feet, the fact that I’m horribly behind on my deadline (10am Pacific Sunday) is of little consequence. After all, Google had a year to come up with something for its Google I/O conference and zeroed out with a loser Flashbook, no music deal, and no TV disruption either. The Popular Mechanics set is juiced up with a toolkit for running your house, and Google Me or +1 or Gsnot threatens but does not yet have a reason for life.

The Microsoft Skype deal could be characterized by “at least they’re doing something.” Given the company’s investments in Bing and XBox, owning a real social media platform is surely a good thing when you get past the current phase of Twitter and Facebook hegemony. Apple’s FaceTime forced the ante as it gobbles up the email namespace as the video address of record. The Skype deal also damages GTalk, which Google has stupidly deprecated on iOS and its push notification queue.

But Skype both supports push notification and maintains a connection. While I type in Pages, I receive pushes in realtime at 35 thousand feet. As John Taschek pushed just now, easily worth $2billion. He pushed not only from his iPad2 but his Droid and PC. Works on the Mac too. While Google times out on its stupid web-only gadget I am multitasking across 3 or 4 OSes, depending on whether you think OS/X is anything more than a deer in iOS’s headlights. This is big news for Microsoft as long as Steve Ballmer can deprecate Windows.

Unfortunately for Steve, he’s in a serious struggle with the other Steve for enough runway to come up with a Skype OS strategy in time to blunt the impact of the Apple value chain. If you see Windows Phone as XBox lite and Kinect gestures as a substitute for the millions now comfortable with iOS and Android swipes, you still are several years away from a serious run at Steve Sinofsky and the Office Death Star. The very place Microsoft is vulnerable is also Sinofsky’s raison d’être for ascending to the throne.

And of course that presumes Apple stands still, which is exactly not going to happen. Let’s look again from 35 thousand feet, as the next version of iOS delivers smart swipe tools that bounce you back and forth between push notifications and saved state. Right now I have to double-click the Home button to go to the icon bar of open apps, then load one, and so on. If the devs are right, soon we’ll swipe down to load the icon bar or left or right to navigate between last opened apps.

Saved state will also improve, from nowhere as in the Wall Street Journal app to Skype’s gateway menu of chat sessions to the actual state you left the screen in. Perhaps the Push Notification View button can be left as it is but the Close button can morph into a staging area to respond to a message and then close the window. Saved state could morph into a split screen drag and drop editor where you route images, URLs, and stream data.

You only have to take a look at the latest Concur app to understand how far the iOS platform has come. A few months ago, you couldn’t do a tenth of what you could do on  the web; today I can add receipt images as I travel, find the hotel and registration code as I step up to the check in counter, do the most complex expense reports and book new travel simultaneously — all at 35 thousand feet while my wife negotiates with the in-laws and pushes updates as I struggle with this post. Looks like I’m going to my high school reunion after all.

Every trip takes me a big step closer to leaving my laptop at home, as iOS gobbles up more real estate on the realtime social game board. Last year we heard about how Netflix would be brought to earth by the studios pricing streaming out of the market, the way the record cartel killed Internet radio. It didn’t happen.  Already CBS and some cable networks are switching from fearing Netflix to loving the increased revenue for the programming formerly known as reruns and high value niche casts like Damages and Mad Men.

Google can hurt Microsoft with its Chromebooks, but the more it drives Redmond away from Windows and toward the Push economy, the harder it will be to fight off Apple with red-state blue-state politics. With the Skype deal, Microsoft sets in motion an alliance that speaks to a post-Windows era, one where the differences between OS are submerged in a stream-based notification uber platform that eats at the heart of Office and email. Just look at our kids and how they use email — not.

It’s almost like Ballmer is disrupting his own company before it’s too late to recover.  Buying its way into push notification gives Microsoft a beachhead for an assault on the post-Office changing of the guard. With e-mail pushed into a backwater, we relearn how to organize our resources based on social dynamics. You can see an incipient cross-platform OS in the outlines of the Skype framework: chat, video, screen and file sharing.

It’s most reminiscent of Microsoft’s purchase of the Spyglass browser code, the first step along the road to Internet Explorer and the choking off of Netscape’s air supply. And it’s ironic that Marc Andreesen engineered Skype’s fattening up for the slaughter. This time Google is Netscape, cobbling together the social OS out of open standards and skunkworks startups. Will Microsoft mop up again? Not if Apple has anything to say about it. With Google and Microsoft going after each other, this time Apple is Microsoft.