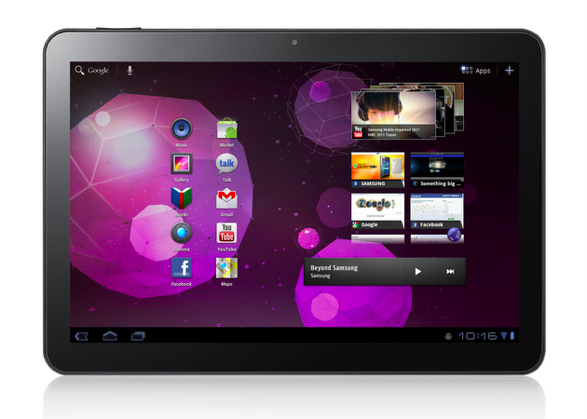 If you’d asked me a week ago what I thought about Honeycomb, the tablet version of Android, I would have said that it was in very bad shape and that it would be several months before it could even hold a candle to the iPad 2. Because despite my excitement to see Android take on Apple’s ridiculously successful iPad, my experience with the Motorola Xoom — the first Honeycomb tablet — has been decidedly poor.

From day one things were off to a bad start. At first, Android Market would crash literally every time I opened it. The Android team fixed that pretty quickly, but the OS was still riddled with weird bugs: swiping between home screens is laggy, widgets go blank and need to refresh, and there are myriad other glitches that pop up at random. And even beyond the bugs, there are weird quirks in the OS that feel poorly thought out (seriously, why does the ‘Home’ button look like an Up arrow?). But now I’ve had some time to test out the Samsung Galaxy Tab 10.1,  the new tablet that was given to Google I/O attendees and will be available in stores beginning June 8. And after spending the last couple of days using it around my apartment, I’m much more optimistic. In fact, I’m guessing this device is going to do very well, and that it foreshadows a bright future ahead for Honeycomb.

For those that haven’t been following along, there have been plenty of reports suggesting that the Xoom has seen meager sales. Yes, there have been other Honeycomb devices released, but the Xoom was first to market and it had the most pre-launch hype, so it’s no surprise that people are using it gauge Honeycomb’s initial reception. Which hasn’t been great. For example, Mike McCue, the CEO Flipboard, has said that the company won’t be porting its nifty application to Android any time soon because the iPad will continue to own the tablet market through the rest of the year.

But I’m becoming increasingly convinced that my issues and the tepid response to the Xoom have more to do with the hardware than Honeycomb itself, because I’m enjoying my time with the Galaxy Tab much more. I’m not going to do a detailed run-through of the hardware specs (which aren’t my forte), but there are some differences that are immediately apparent between the two.

The Motorola Xoom weighs 1.6 pounds. It has a rubberized back that feels sturdy, but it meets the screen at a fairly sharp edge that doesn’t feel great in your hand. The new Galaxy Tab weighs 1.24 pounds. It has a rounded plastic exterior that feels cheaper, but also feels much more natural in your palm. The difference in weight between the two is no more than a hefty hamburger — and yet it makes all the difference.

Holding the Xoom with one hand isn’t difficult in the slightest, but it isn’t effortless either. You’re bound to feel some muscle strain if you do it for a long time, and if you balance it against your lap (or your stomach if you’re lying down), you’re not going to forget it’s there. The Galaxy Tab feels far more natural. It doesn’t weigh down on you nearly as much, and, as you hold it in your hand, its smooth edges feel more like the coveted iPad 2 (in fact, it’s actually slightly lighter than Apple’s device). These differences sound petty, but given that your interaction with a tablet is inherently physical, they’re important.

Don’t get me wrong: Honeycomb 3.0 on the Galaxy Tab is still buggy as hell. Sometimes I feel like the browser is a game — tap the wrong thing, and you’ll suddenly jump to the bottom of a webpage, or all animations will get sluggish. Even the 3.1 update, which I just tried out on my Xoom and will be available for the Galaxy Tab in a few weeks, doesn’t seem to have fixed all the performance kinks. And Android Market still appears to have fewer than 100 applications optimized for the tablet form factor.

But I think that will change soon. All of the Google I/O attendees (most of whom are developers) obviously now have the tablet, which will probably help give the OS some momentum. And, perhaps more importantly, I think this new wave of better, lighter Android tablets will spur people to actually buy them, so developers will have a bigger incentive to optimize their apps for the tablet.

iPad sales won’t suffer in the slightest (it is still much more polished and intuitive than Honeycomb, and probably always will be). But, just as we saw with Android on mobile phones, I’m guessing Honeycomb’s growth is going to start rapidly accelerating around one month from now. The Market will get fleshed out over the summer, and then things will really get going this fall as even better tablets land in time for the holiday season. In retrospect it will all seem obvious (of course the multitude of available Android tablets will give rise to a large customer base). But I don’t think anyone who has compared the Xoom to an iPad 2 would have called the rise of Honeycomb a given.

Of course, that’s all assuming they fix the damn bugs.