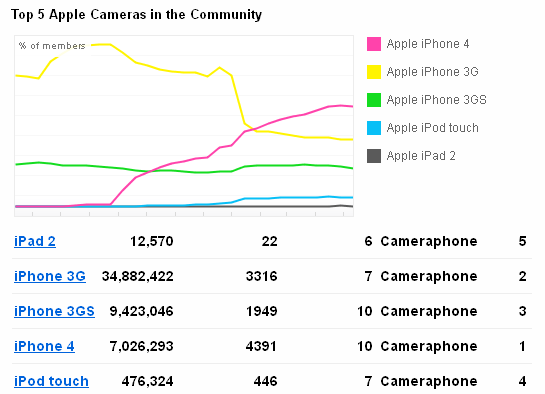 Flickr maintains a live count of the cameras being used on the site, updating constantly with the latest models, showing trends, and so on. And if you head over to the Apple-branded cameras, you find an interesting, though not particularly surprising, statistic: almost nobody is using the iPad 2’s camera. Out of however many million of these things were sold, there are only 22 active iPad 2 camera users on Flickr. 22!

And really, why would you use the camera? It’s low-resolution, bad in dim light, and of course it’s on the back of a damn tablet. The sad thing is that it could be fun to use, but Apple just didn’t think a quality component there was necessary. Oh well, maybe they were right. I don’t see myself using a tablet camera much whether it’s crappy or decent.

The new Android tablets have better cameras, to be sure, but even the five-megapixel one on the Xoom is no star performer. I say up the sensor size, limit it to 1280×720, and focus on clarity and low light.