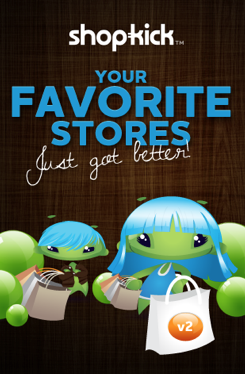 Let’s say you go to a store and check-in. Then what? Maybe there’s a deal. Maybe. But for many location-based services, the check-in is the end of the equation. Shopkick is pretty much the opposite.

From the beginning, they’ve shied away from the check-in. Why? Because most of them are pure BS. Either they mean nothing, or they’re fake. Retailers don’t yet get this — but then again, most of them still have no idea what a check-in is. Shopkick has been aiming to educate retailers on how to best utilize mobile devices to incentivize customers to come into their stores — and more importantly, shop in their store. And today, Shopkick is launching version 2 of their popular application.

Since its launch last August, Shopkick has been doing very well. Between the iPhone and Android, they now have some 1.5 million active users, co-founder Cyriac Roeding tells us. Of their entire user base, 40 percent are active monthly. 20 percent are actively weekly. And 5 to 10 percent are active daily, he says. Solid numbers. But Shopkick hopes to improve upon them. “The dirty little secret of mobile is retention,” Roeding notes.

And Shopkick 2.0 delivers some new features aimed at making the app more sticky. The biggest of these is the new Favorites screen, which allows users to create a custom area for their favorite retailers. Think of this as the best of the Sunday circulars that you find in newspapers. It’s all the best deals right in front of your face.

But it’s not just deals that are shown, it’s deals and rewards combined. “To consumers, deals and rewards are the same thing,” Roeding says. And within Shopkick 2.0, there are a lot of exclusive deals for Shopkick users, he notes.

Another new feature of the 2.0 release is the ability to toggle between close-by deals and the ones from your favorite merchants. And there’s a top-level Dailykicks area to show you the hottest deals across the system.

With their massive roll-outs in Best Buy, Target, and other huge chains nationwide, Shopkick probably already has the deals that they need to succeed. But they’re still aiming for something larger. “We’re going to invent the physical world click,” Roeding says. “Why can’t you pay anyone for foot traffic?,” he wonders. “And consumer value should come from getting rewarded when you walk in to a store,” he says.

“Check-ins are like a billboard close to a store, but it’s not the store,” he notes. That’s why Shopkick gives these stores their own devices to precisely track when a user actually enters their store and boots up their app. And for their troubles of being tracked, consumers earn automatic kickbucks (the Shopkick currency) and access to special deals. And these kickbucks can be used across many different stores.

Look for Shopkick 2.0 to go live today in the App Store and Android Market. 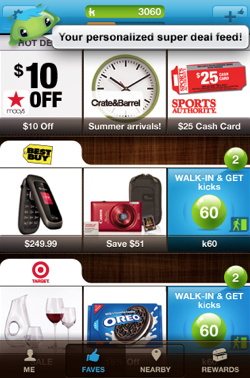 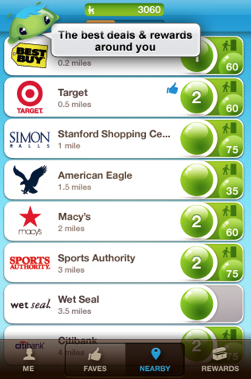