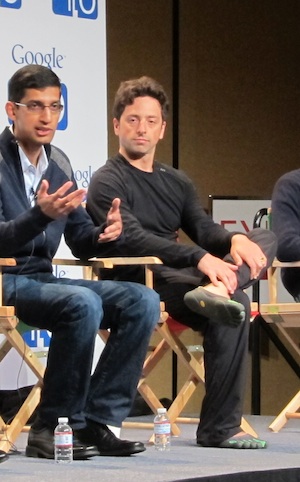 Today during a press Q&A following the Chrome keynote at Google I/O, Google co-founder Sergey Brin joined the panel to take questions about the announcements. Naturally, the questions strayed a bit. But Brin still did his best to answer them — sort of.

One question asked Brin about his new role at the company. Google recently saw the triumvirate of power swap places, which co-founder Larry Page becoming CEO and Eric Schmidt becoming Executive Chairman. Brin’s role has been talked about much less. And there’s a reason for that: he’s pretty secretive about it.

Before addressing his role, Brin made sure to note that Schmidt is “actually very involved.” He said that while Page is running a lot of the internal processes now, Schmidt is doing a lot of the external stuff. As for Brin himself? “I get the luxury of doing fun things. I got the sweetheart deal of this exchange,” he quipped.

Funny, deflecting, and vague all in one statement!

“I don’t have anything to show yet,” Brin continued. The only project he is working on that he would name is “Chauffeur”, the name of Google’s now well-publicized autonomous car project. Beyond that, all he would say is that if he’s lucky, by this time next year, he’ll be able to talk about some of his other projects.

The only other thing Brin has been rumored to be directly involved in recently beyond Chauffeur are Google’s social projects. The search giant has gone out of its way this conference not to talk about any of these projects — because they don’t want to build them up unnecessarily or prematurely.

It’s known that Vic Gundotra (who has been quite visible here — though not as much as last year) and Bradley Horowitz are leading Google’s social push. Brin’s role isn’t clear, but he’s still believed to have a big presence within these groups.

When someone asked about the recent news that Google was being forced to pay $500 million by the DoJ after an advertising investigation, Brin took advantage of his new role, stating that he was “fortunate” to report that he no longer knows much about what goes on with Google and acronyms like the DoJ. Instead, he focuses on acronyms like Cr-48, he joked.

And yes, Brin is still rocking the Vibrams.