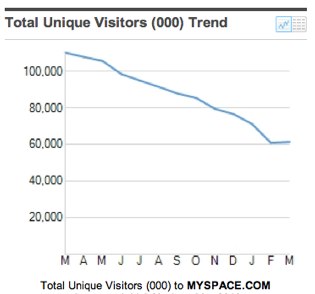 Check out the graph in my March post about MySpace’s free fall in usage. After a long decline you’d expect a site like MySpace to plateau and find some sort of stable group of users. Instead, all the data says their decline is actually accelerating.

So I was surprised to see unique visitors level off over the last two months, according to Comscore. And by level off, I mean a straight line floor at about 62 million worldwide monthly visitors and 37 million U.S. visitors. Look at that chart. It’s just weird. Uniques should have fallen another 8 million or so. Instead, MySpace held the line.

Curious, I dug a little deeper into their stats. Not good.

While worldwide uniques were flat at 62 million, average daily visitors dropped 13% during the month, total time on site dropped 23% and total page views dropped 23% to 3 billion.

None of this adds up. MySpace has long talked about making changes to improve user experience that would impact page views but actually increase time spent on site. That isn’t what’s going on here. What is going on here is that overall usage continues to disintegrate at an increasing pace, but somehow unique visitors are flat and not decreasing along with the other usage stats.

It’s extremely unlikely that something like this would just “happen.” Either MySpace bought a ton of traffic that hit the site and then vaporized, or they engaged in some sort of marketing to users like a massive email drive, or something else. From what we see MySpace has actually curtailed email marketing to users after a big push late last year that didn’t seem to work.

MySpace clearly doesn’t want to see their usage numbers deteriorate so quickly right in the middle of a sale process. I understand the incentive to have unique visitors level off. What I can’t figure out is how they did it. It just doesn’t look like a natural event to me with the other usage stats continuing to fall off a cliff.